Continuation of the story in Yangshuo. Although we started the activity to explore Yanghuo at 3pm … but there were so many stories until 1 entry was not enough..hehehehe. The story of a roadblock is when we boarded the public bus. Cute because that bus … like a mini bus. Mining is twice as cheap as riding a tuk-tuk. The bus is the last stop at the bus station. From there we know our location bus to Guilin later.

My sis is there to record a halal place to eat at a hotel. I forgot the name of the hotel. Have him explain to the tuk-tuk driver … I don’t understand. Convey us are surrounded by some tuk-tuk drivers. Everyone does not understand where we want to go. Until a rather young tuk-tuk mamat came..he understood when we called the hotel. Until the hotel restaurant..aikk..no way. Then ask the restaurant staff..people say there is no halal restaurant in there. We went out feeling sad.

Suddenly my sis saw 1 small office tour agent. Alhamdulillah, the staff is good at English and he pointed to a halal restaurant across the street not far from there. Can see. Happy until I don’t know what to say … hahahaha. More happy when I see people selling big wines. If it tastes..it’s sweet. Although I do not like seeded grapes..I also bought it because it is very sweet. Interested in yellow fruit..buy a little. Although there is a language problem..the fruit stall seller understands what I want..I want every fruit to be valuable CNY10. 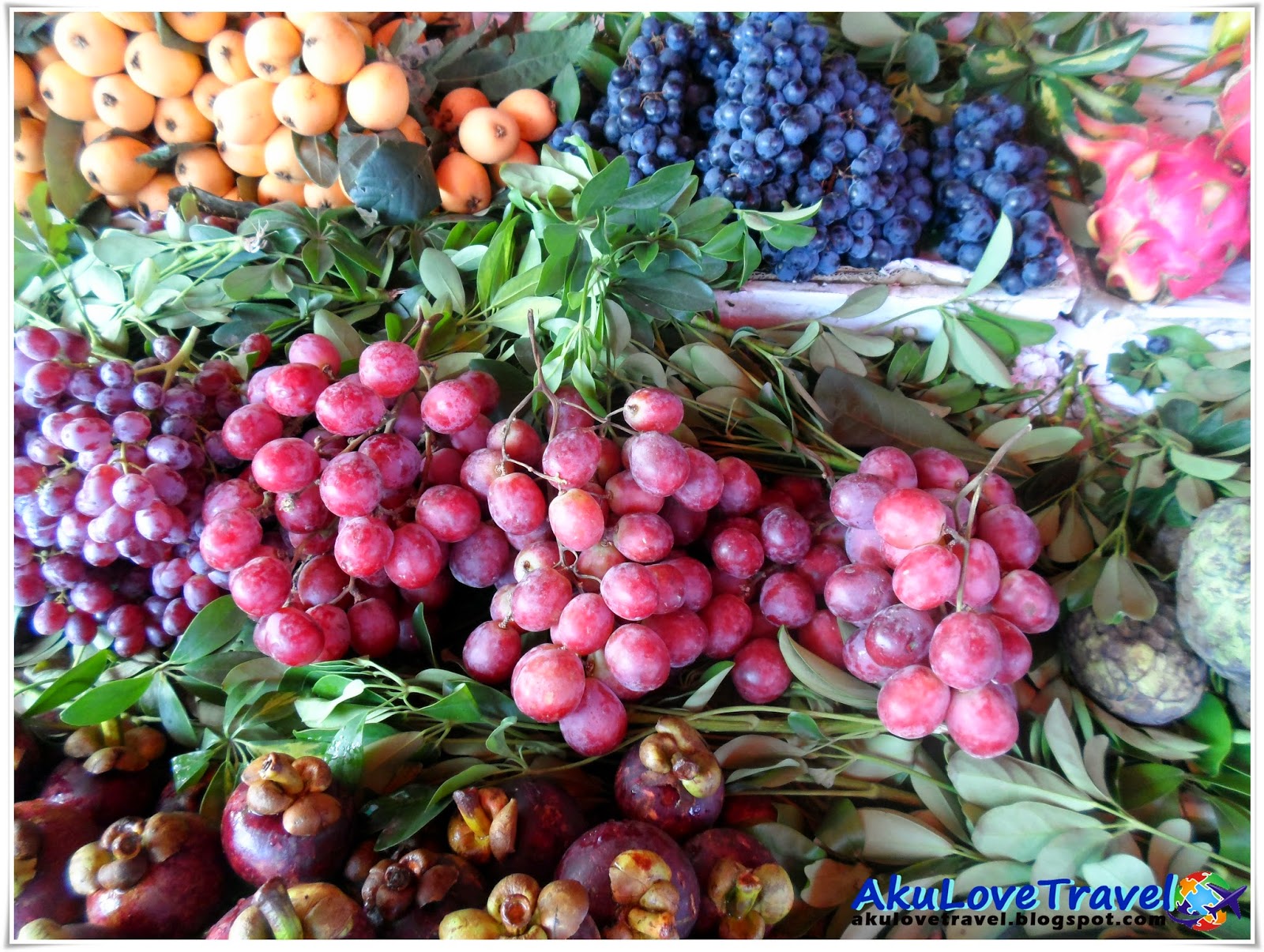 The colorful of fruits

We had to cross the road which is a big roundabout so people can park the bus in the middle … hahahaha. Until the restaurant..upload … tokey restaurant I don’t know exactly what we want … hahaha. Menu all Chinese language. If you look at the picture of food on the wall..not sure if the chicken goes to the cow to the goat to. We really do not like goats, so do not want goats in the dish. The funny thing is my sis made the sound of chickens fluttering like … wakakakakaka. He nodded understanding … wakakaka. I almost wanted to make a noise while crossing my arms to say no .. suddenly there was a customer who was a little good at English … one or two words ….. hahahaha. He helped us..He confirmed my food tasted like beef and my sister’s food tasted like chicken. 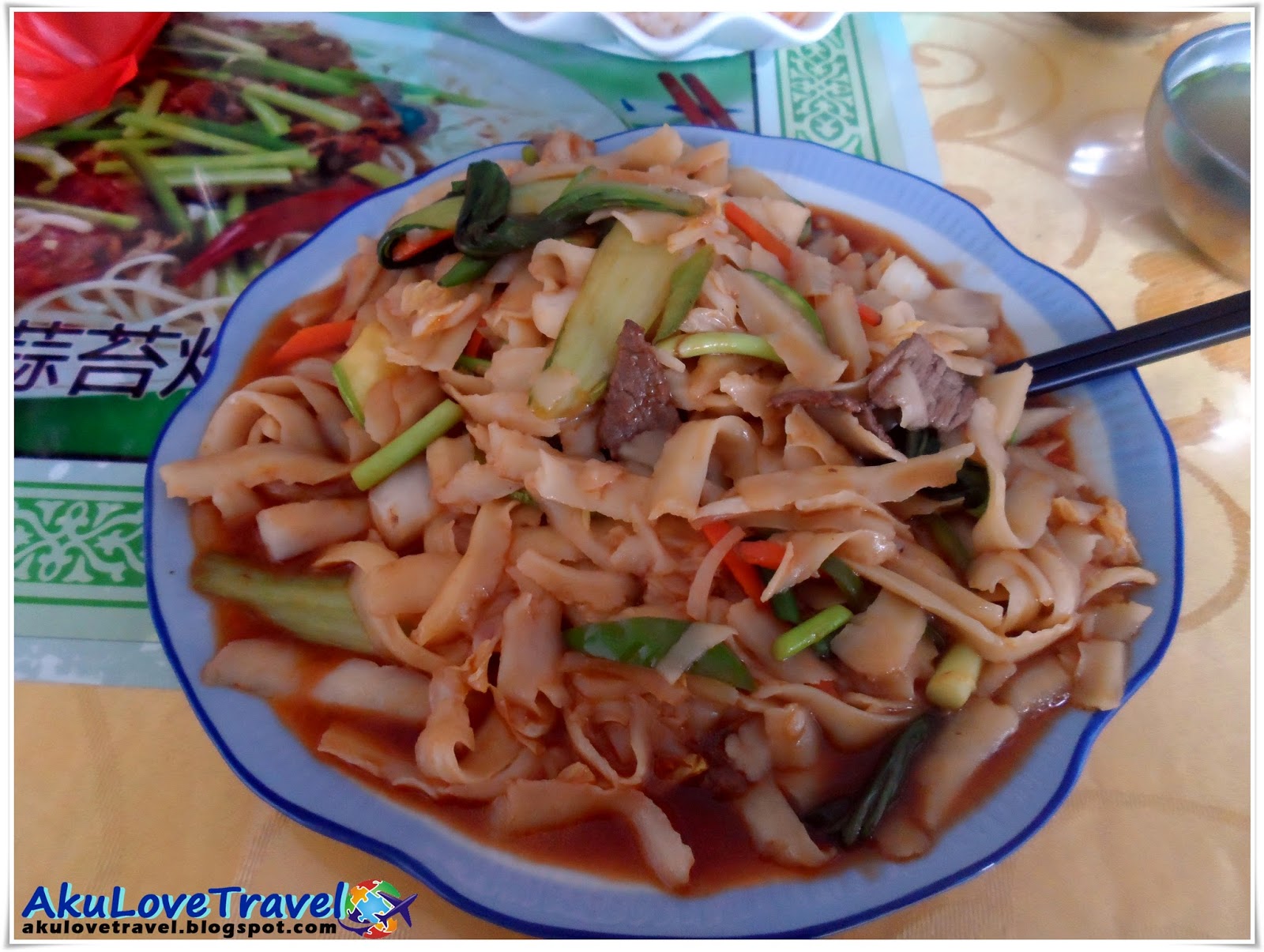 I thought the picture of the food on the wall was vegetable soup..apparently mee daaa. I saw him docking a piece of dough in a pot..apparently this noodle. The rice I ordered had to be tapau. 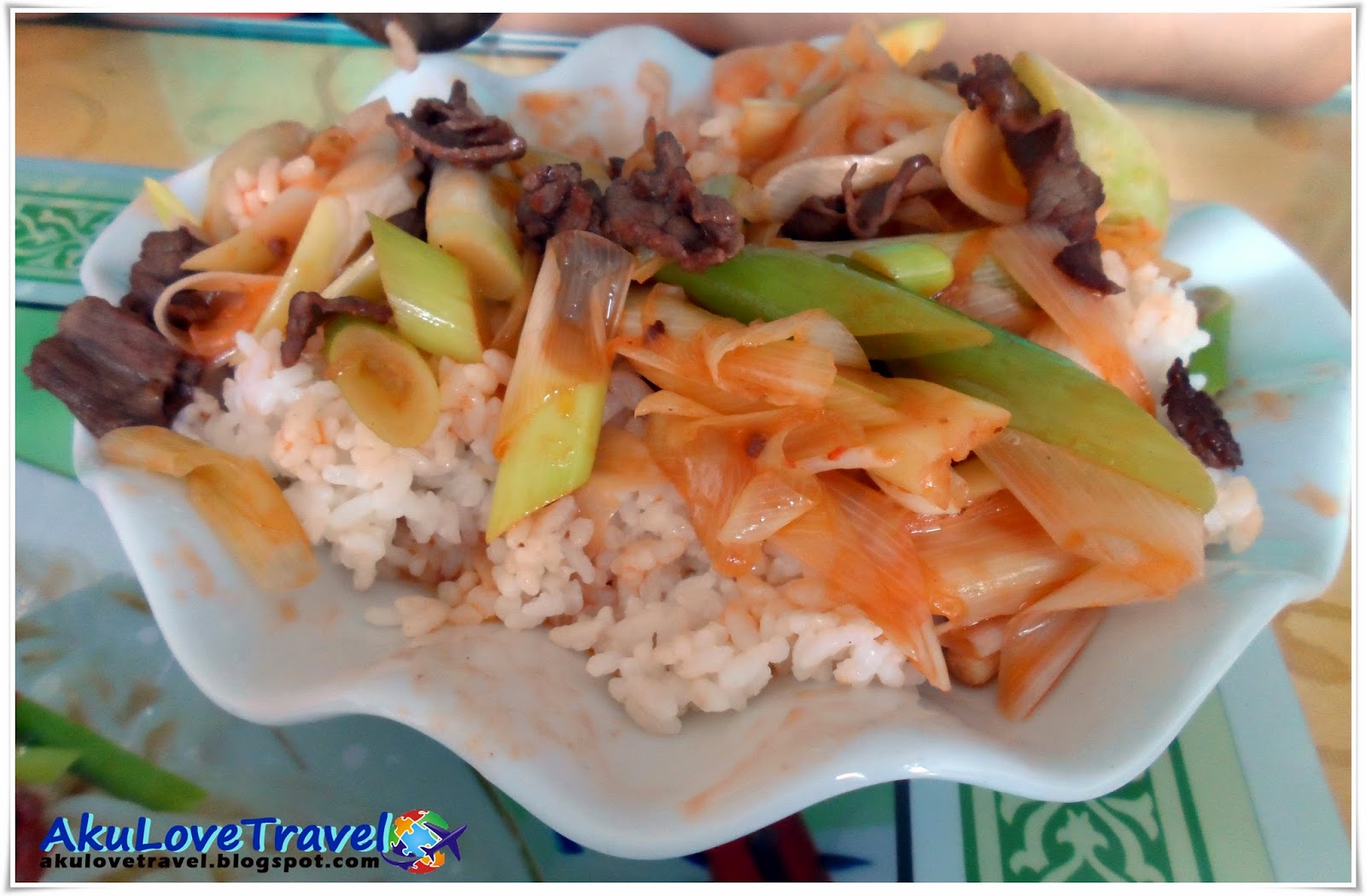 My sis ordered nasi ni..sedap biasa2 jer. Lastly, we just shared this rice because the noodles were not tasty at all. 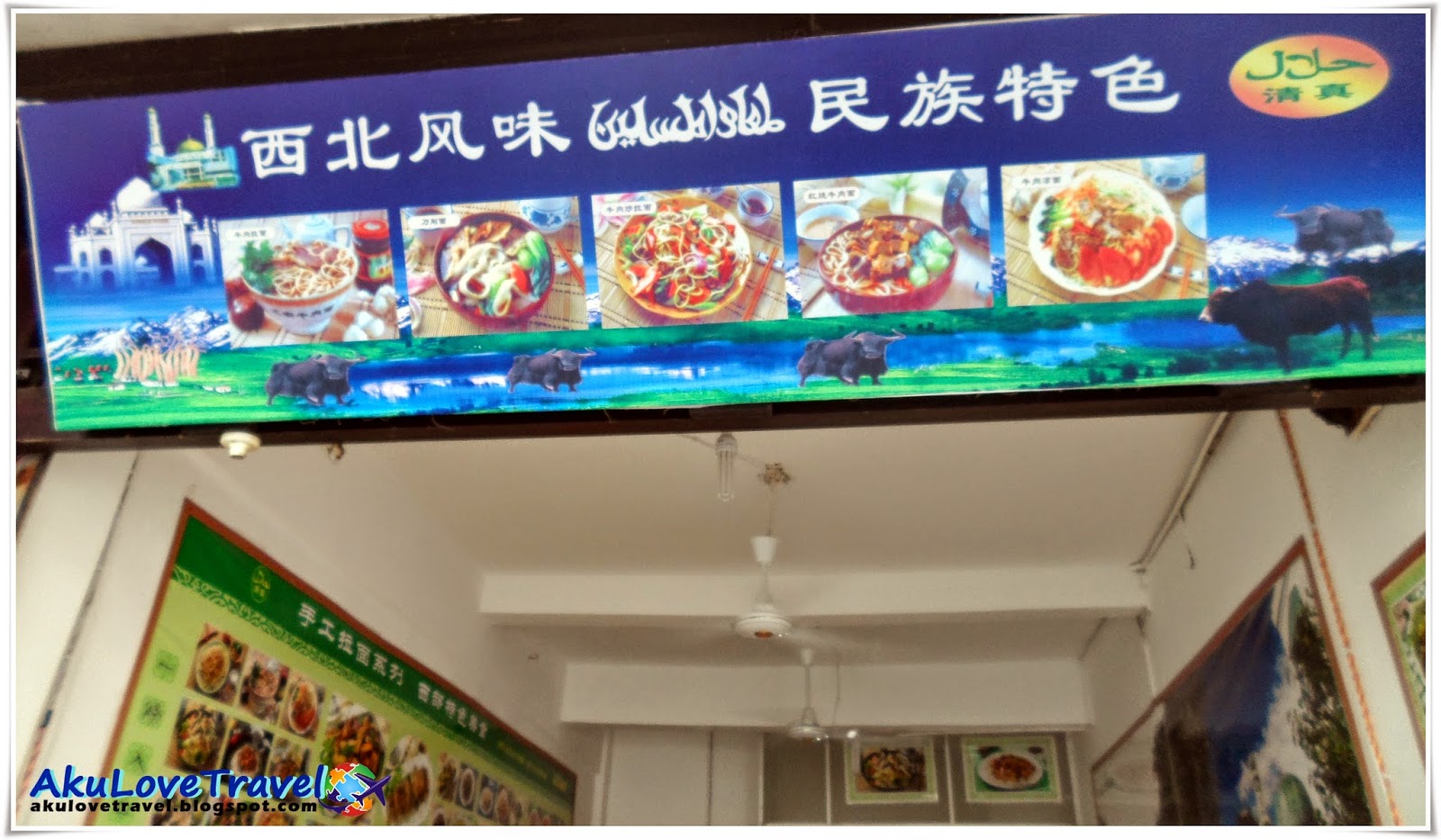 When I leave the restaurant, I snap this signboard..hah ?? does not appear on the signboard ?? I think that’s yak..remember the story I’m a Traveler..he gi China enjoys eating yak jer. Is it in the dish we eat is yak ?? I’m not sure because the taste of the meat I eat is like beef.

When we ate..we stopped at a shop that looked like a pharmacy. The strange thing is that there are some people who are being given treatment..eh open clinic ?? When asking for panadol..I don’t know a pharmacist or a doctor I don’t understand. When he put his hand on his forehead, he understood. Everything needs jer style..hahahaha.

We returned to the hotel on a motorbike. Until the hotel area..eh there is a night market. The market is called West Street Market. Let’s look at the picture. 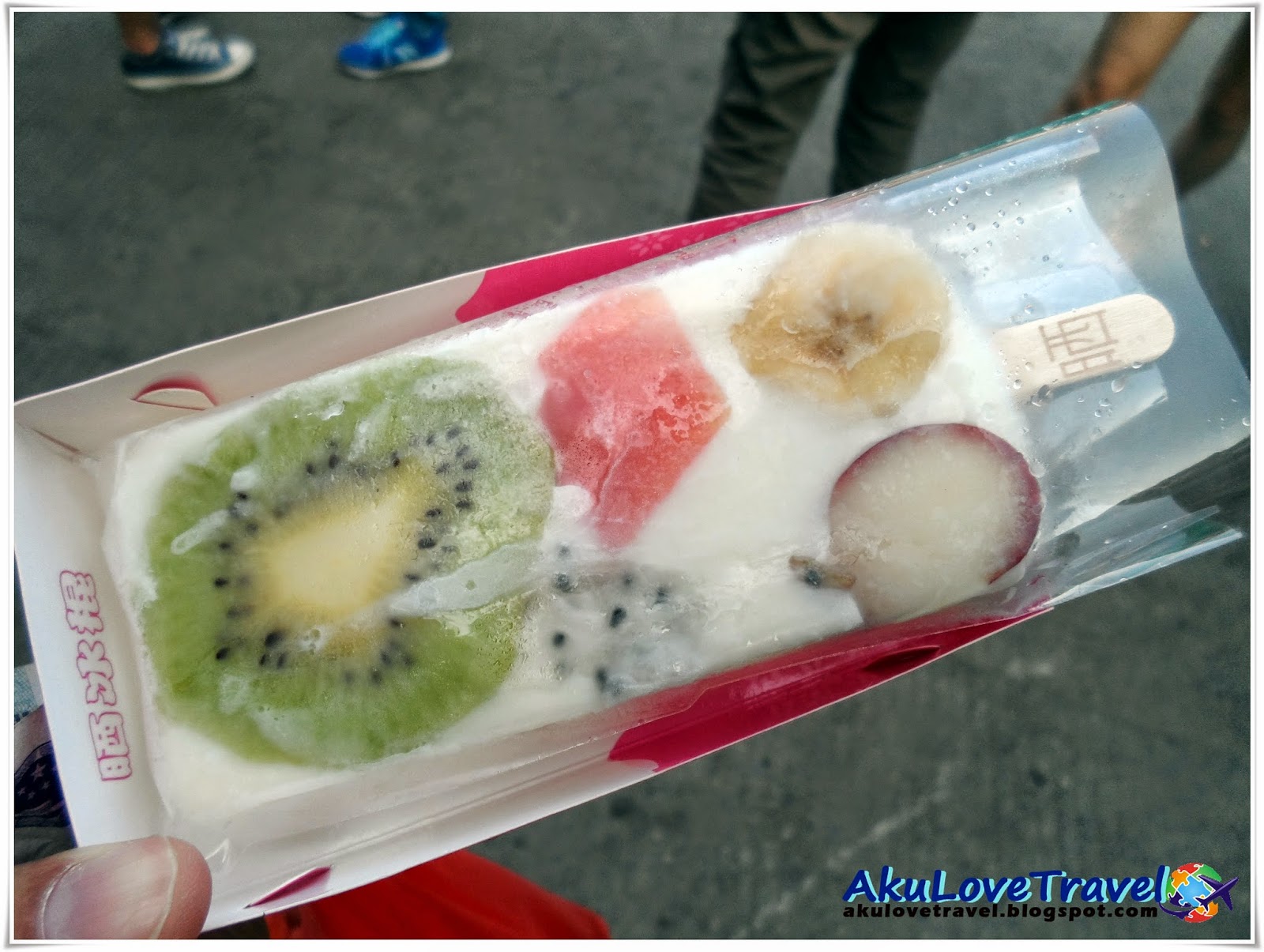 very delicious ice cream..taste of milk..there must be 4-5 types of fruits..for ideas for me to try at home … hehehe 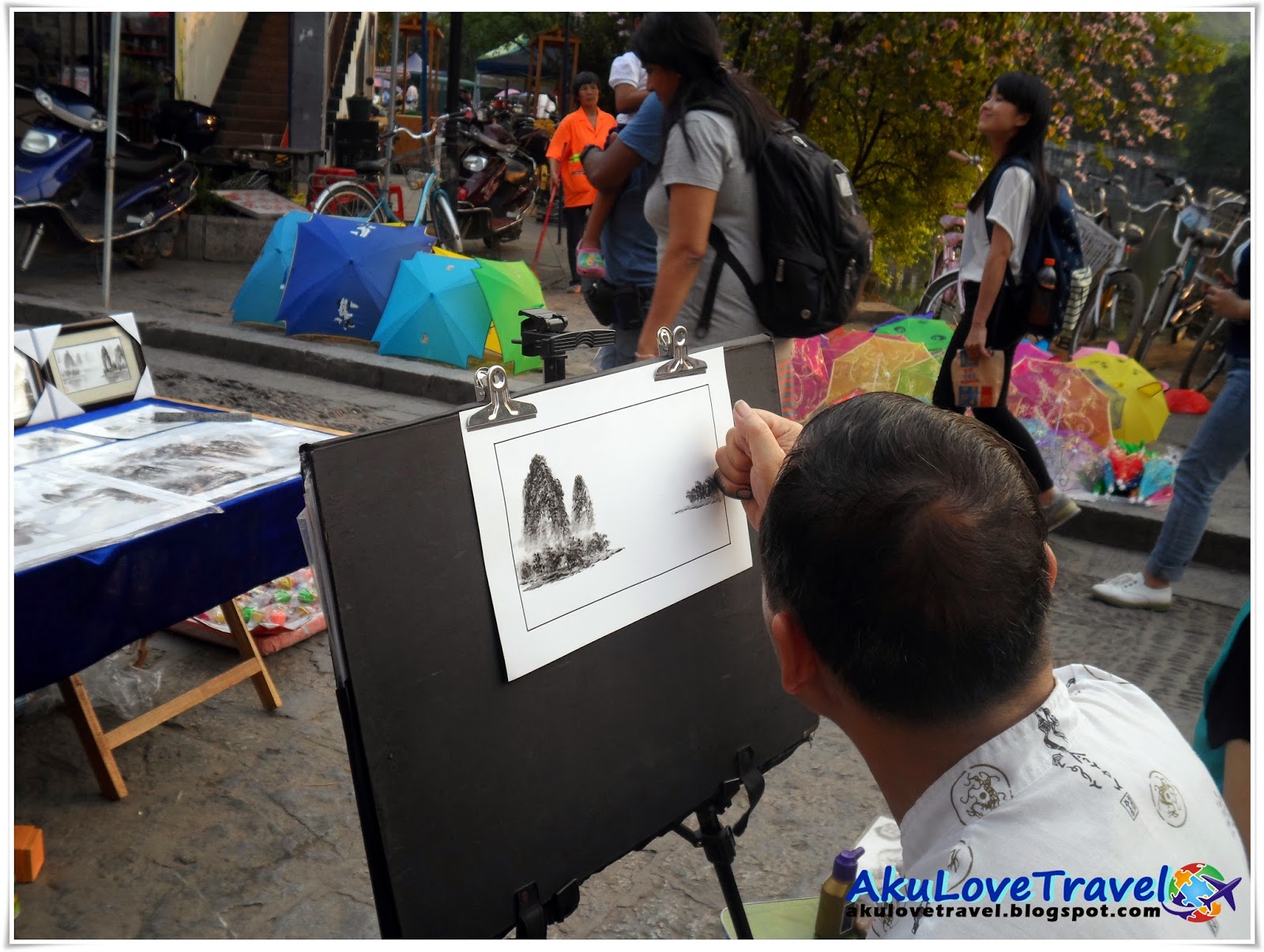 Just use your fingers because he can draw..very artistic 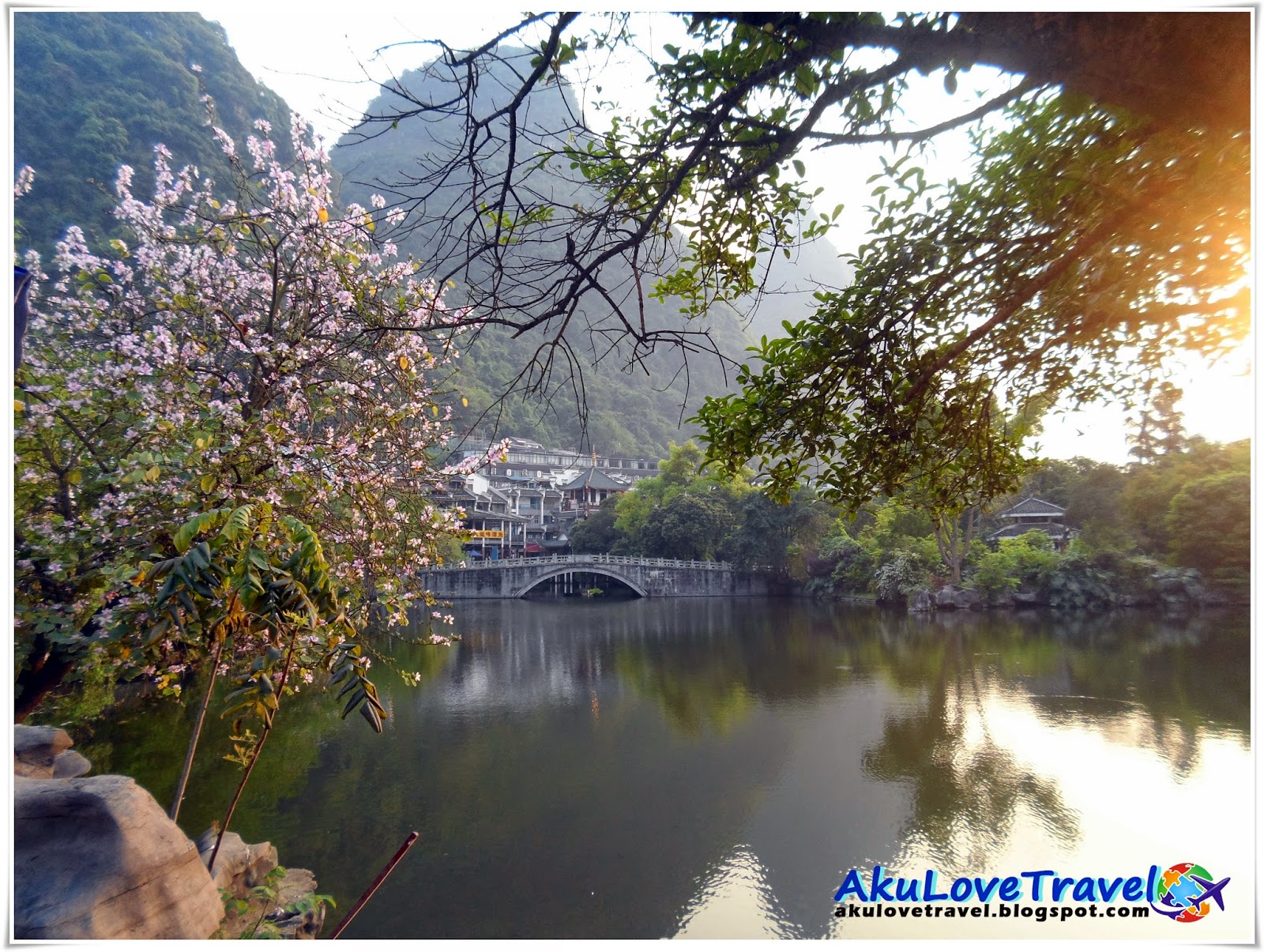 Satisfied with the night market, we continued back to the hotel. It’s really tired..know that until Yangshuo we have not had time to rest very much. My sis already paid the entrance fee for Liu San Jie Impression Light Show that night (for the entrance price I will share in the cost later). When I pay … there will be people who are greedy. So don’t worry to get there. The hotel staff was really good..he accompanied us to the main road to wait for the van that would take us that night. Not long wait..in 2-3 mins because the person has arrived. It was a blur after that night..why ?? The group that was with us were all Chinese..even Chinese drivers..we did not understand anything when he explained … when asked by other group members..even people were not good at speaking. Menonong, we followed the driver of the van to enter the entrance area. Then we were handed over by a mamat who did not know how. Humans are already crowded. Crowded. Dok lah nganga sama-sama dengan mamat yang ntah buat apa tu. 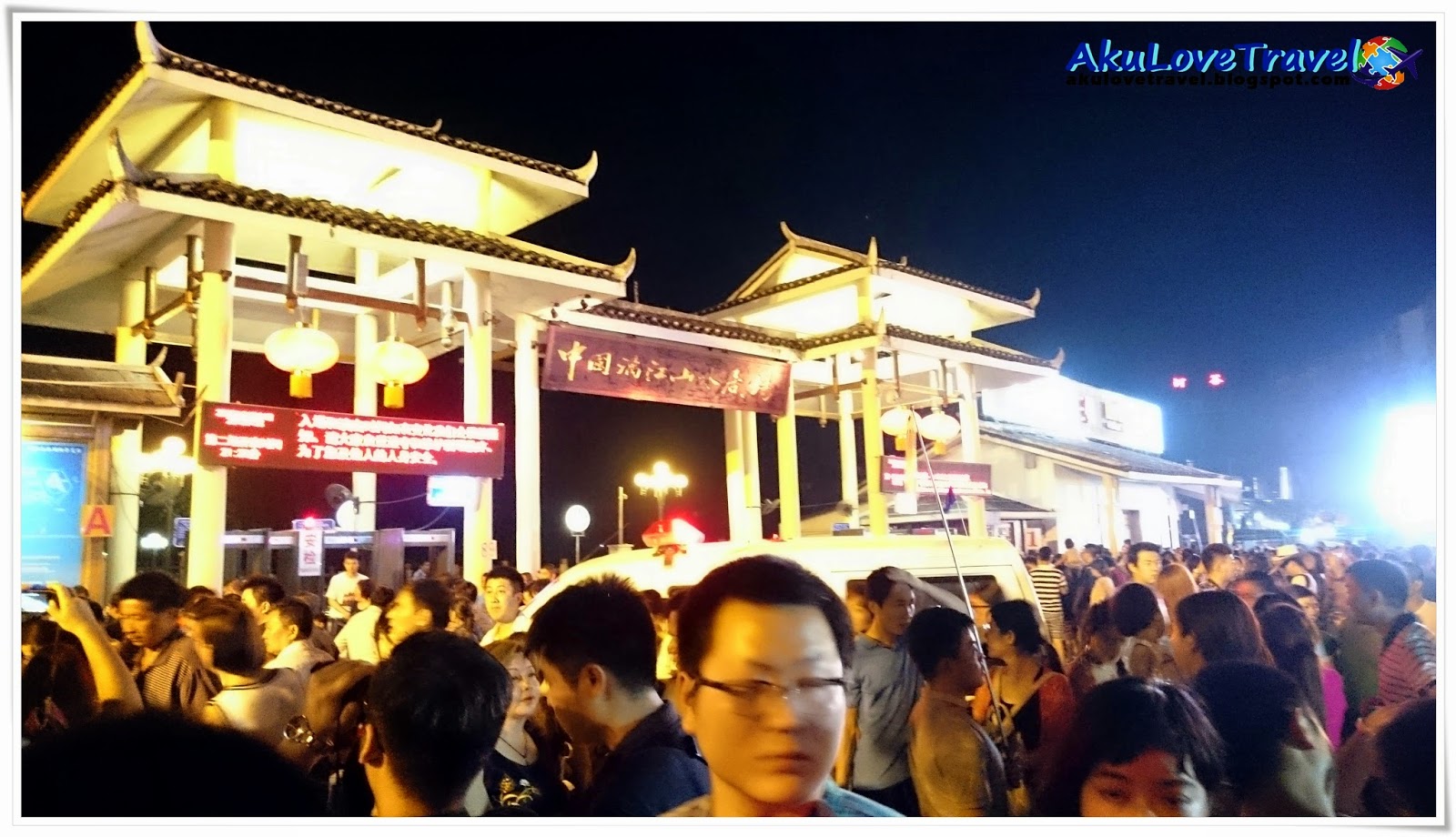 Giler crowded … if you bring small children, take good care of them … fear of disappearing

Then … flocked to follow the mamat to a less crowded area. He seems to say no in Chinese then people will take the entrance ticket from him. Gelabah la kami time tu..ei erk sam sek tau la sikit..yang lain tak tau dah … wakakakaka. My sis kept shouting “i don’t understand” takde orang layan. But Alhamdullilah came because there were people in the crowd who reprimanded and offered to explain … they had to get a ticket following the number that the agent mentioned. Dan no. That is the last 4 digit hp no. Ohhh … just understood..hhaha. He is the one who please listen to our mobile number as it is called in Chinese. Then..we need to walk have a long way to go to the show place. flocked again. The best thing about mamat tau english is that it will make sure we are together with him. he walks in front of us with his girlfriend but dorang fun toleh2 back make sure we do not disappear from dorang. 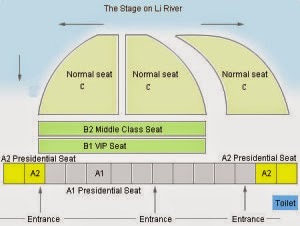 Need to walk about 1/2 km to the entrance. Capik gue.

Already entered the entrance..people will scan the bar code from the ticket. Then you have to climb the stairs to get to the seat. Lots of great jokes … hahaahha. When you sit in the seat, follow ticket no … be relieved. Less than 10 mins, the show started. Jeng jeng jeng …. 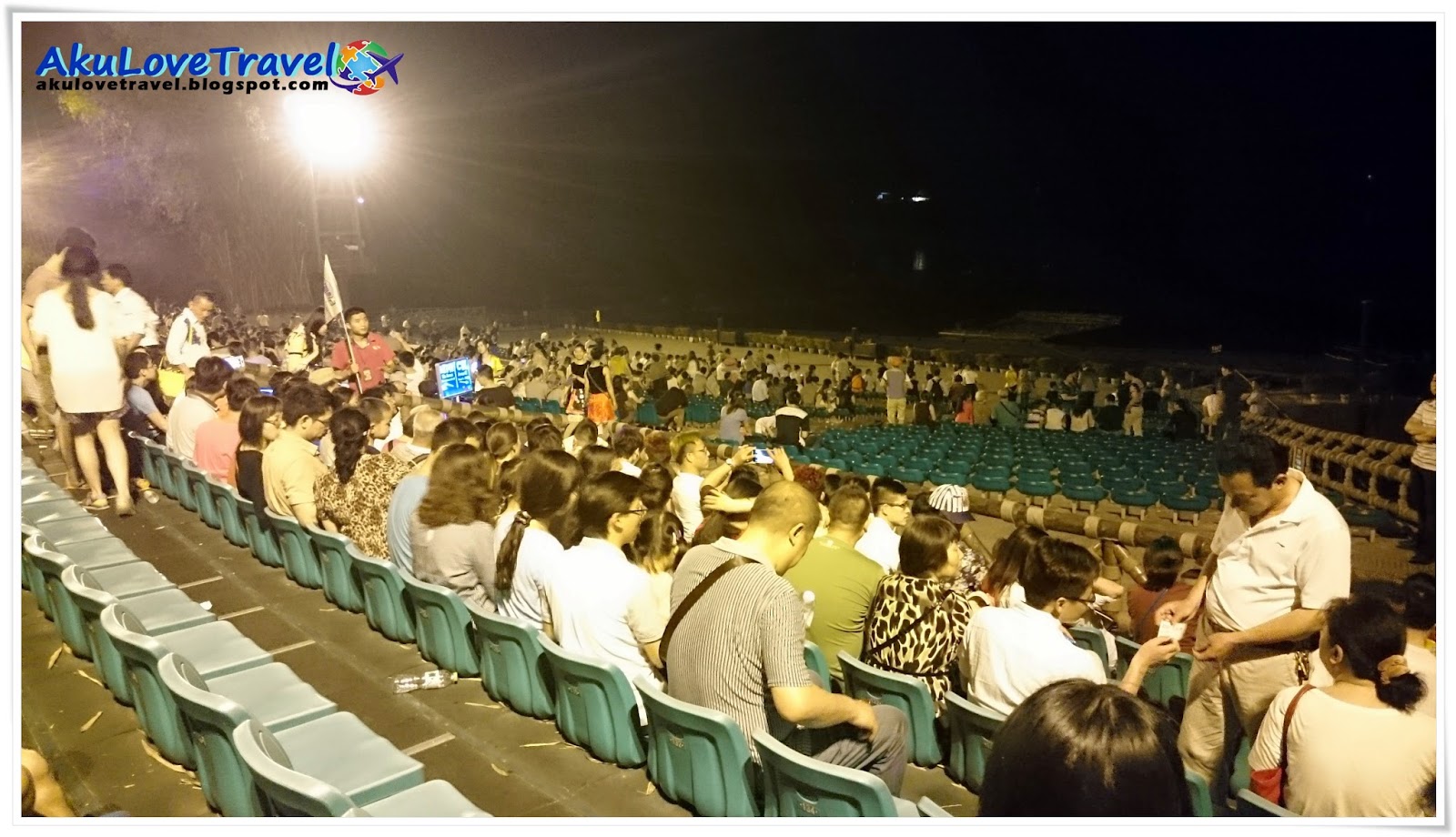 I was a bit of a thousand people that night .. this time is not really a full house because we were among the first to get in 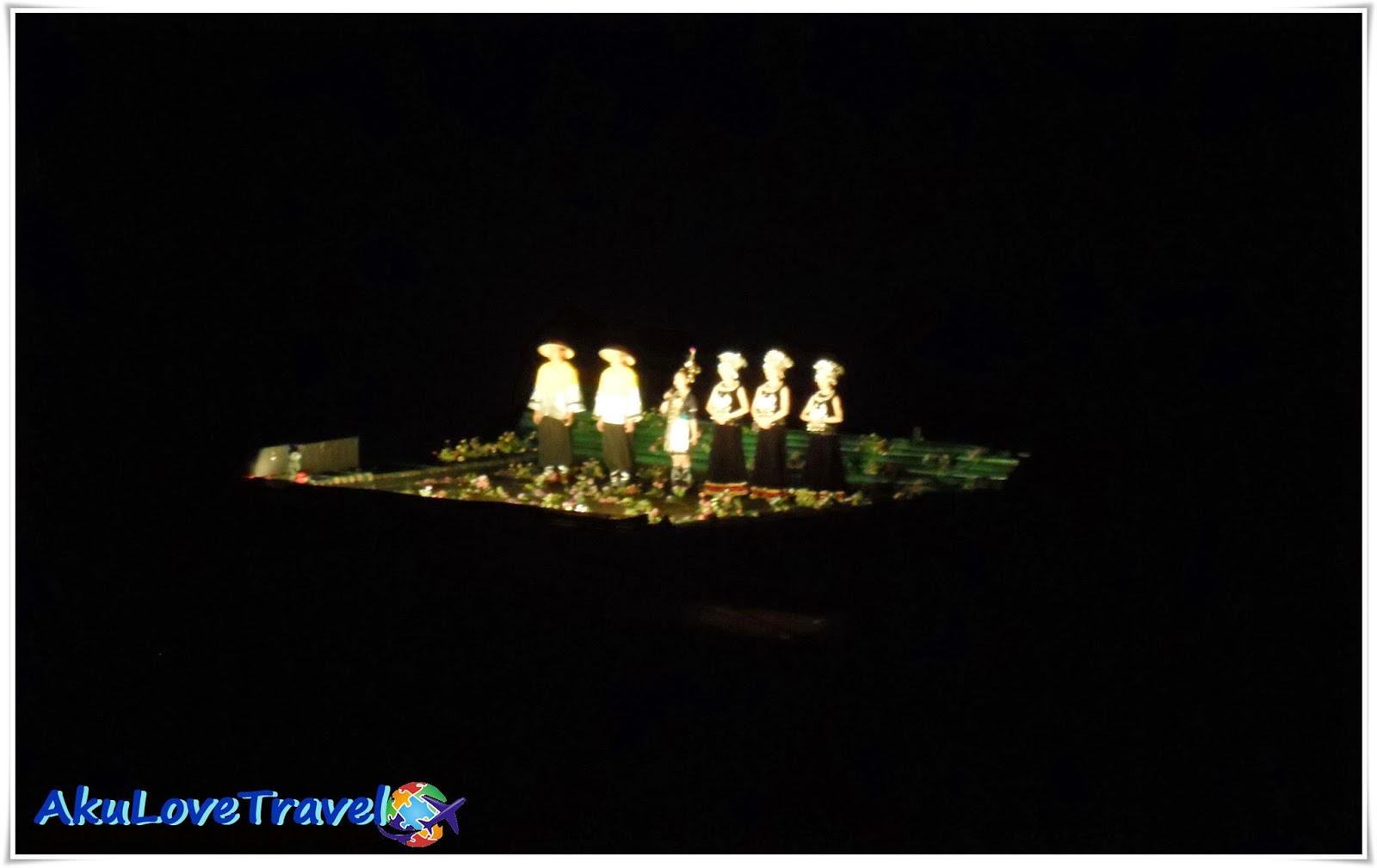 In the dark of the stage..they suddenly came out of this person..speaking loudly..like the beginning of the show it seems..intro white people said.

Amboiii hai..this show is really great..the combination of lights and music makes the show great. The stage show is a river with a backdrop of mountains. There are a lot of actors … I guess in 300 people. This show is like a live theater told by an amoi named Liu Sanjie. There is nothing wrong with my famous fairy tale there. Amoi is said to sing well. In the show tupun singing is really delicious even though I don’t understand a word..hahahhha. Once singing echoes nature daaaa. Also pointed out are the activities of the villagers of amoi … in the river there are many people with bamboo rafts … ready to fish again..hahahah. Behind the river bank came from the dark to the bright light … there were people docking clothes by the river. Someone docked the buffalo .. 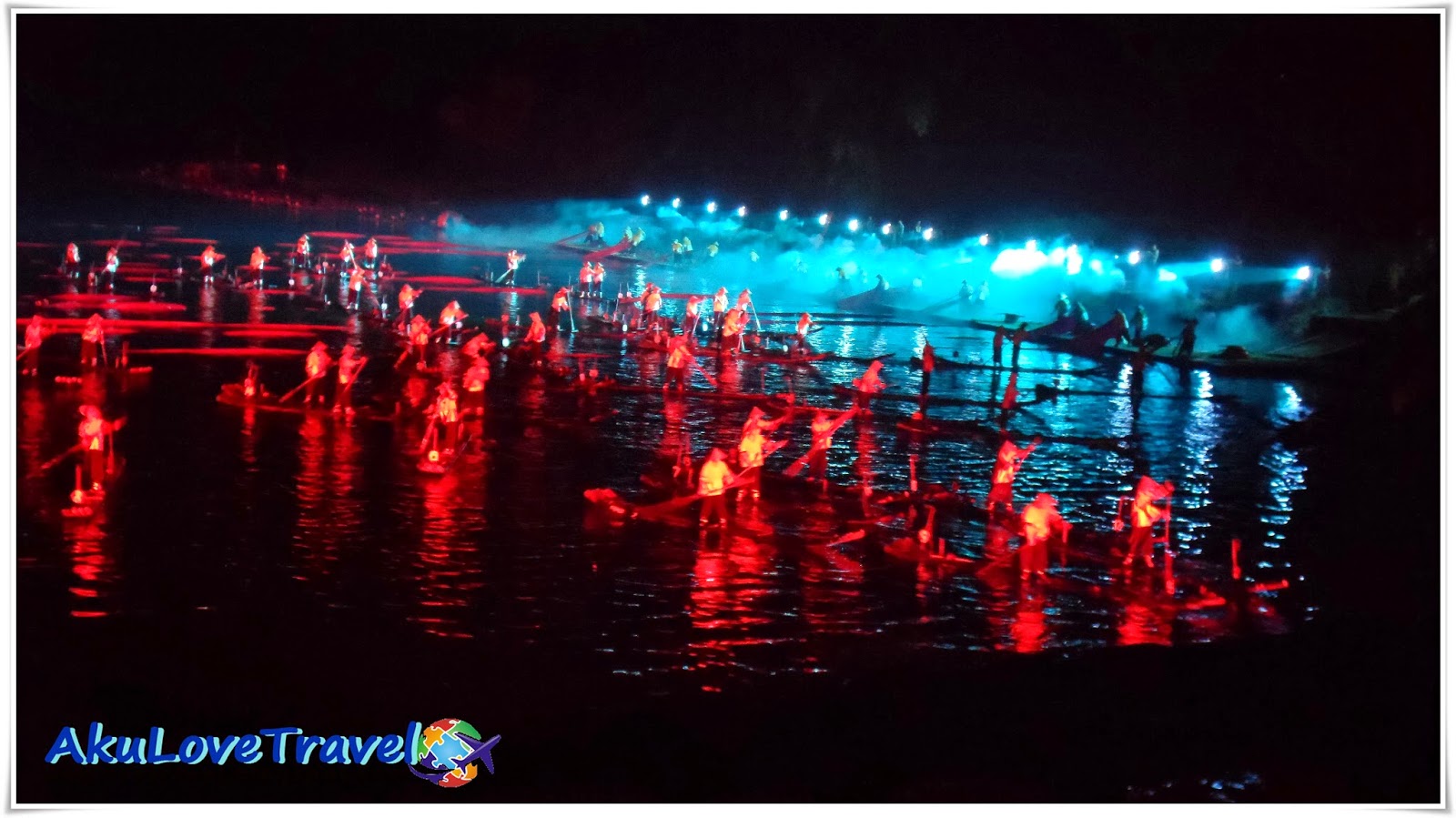 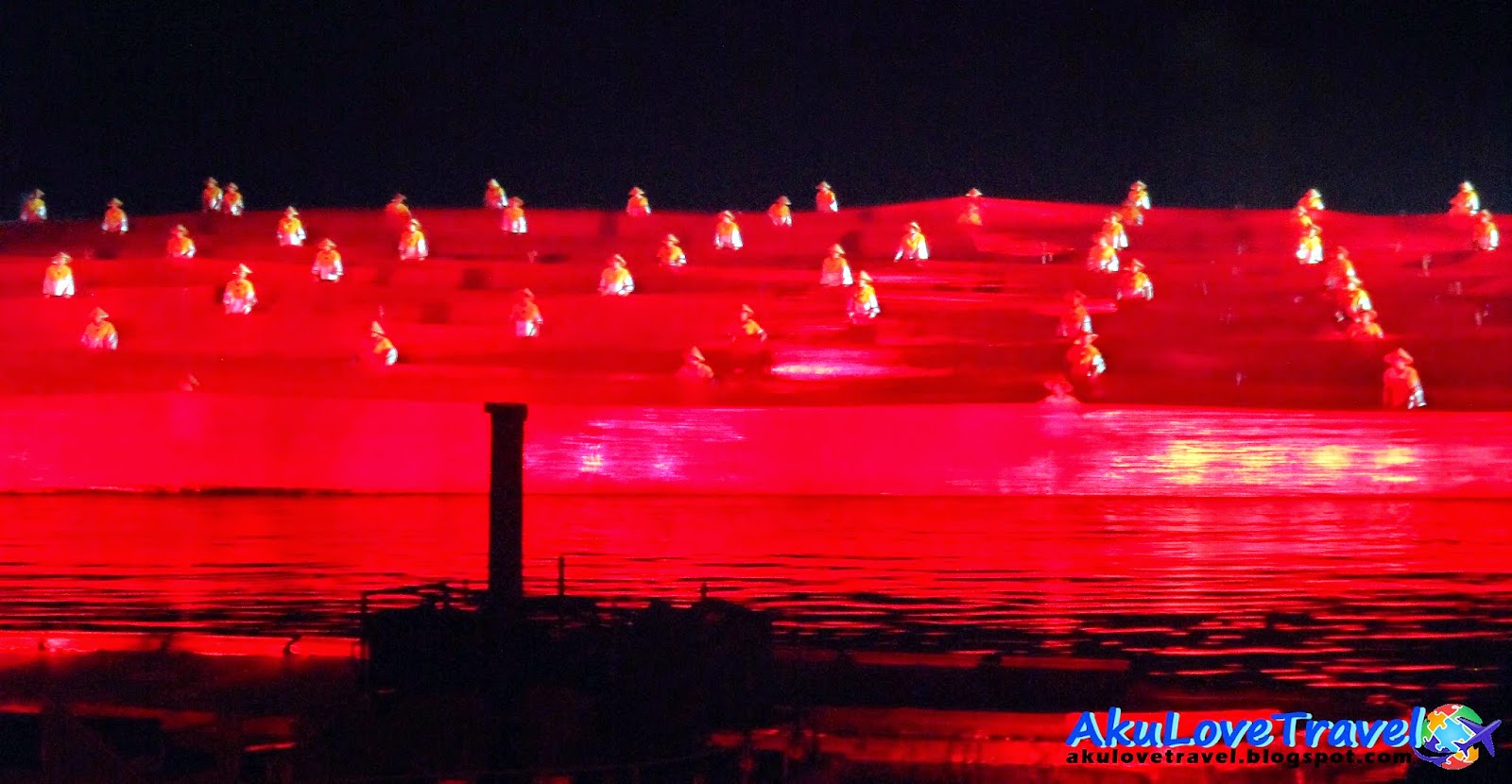 Connect cter amoi tu. Amoi is supposedly in love with the villagers … it must be an issue because even a commander wants this amoi. In the show, it is seen that people want to save the amoi from the commander … there is no fuss … hehehe.

What’s more impressive..since the big moon came. There is an amoi on that month..it’s like dancing on that moon’s child … it’s great because that month is like a squat. Maybe you all can’t imagine what this story is about … so..please watch this show if you have the opportunity to go to Yangshuo. 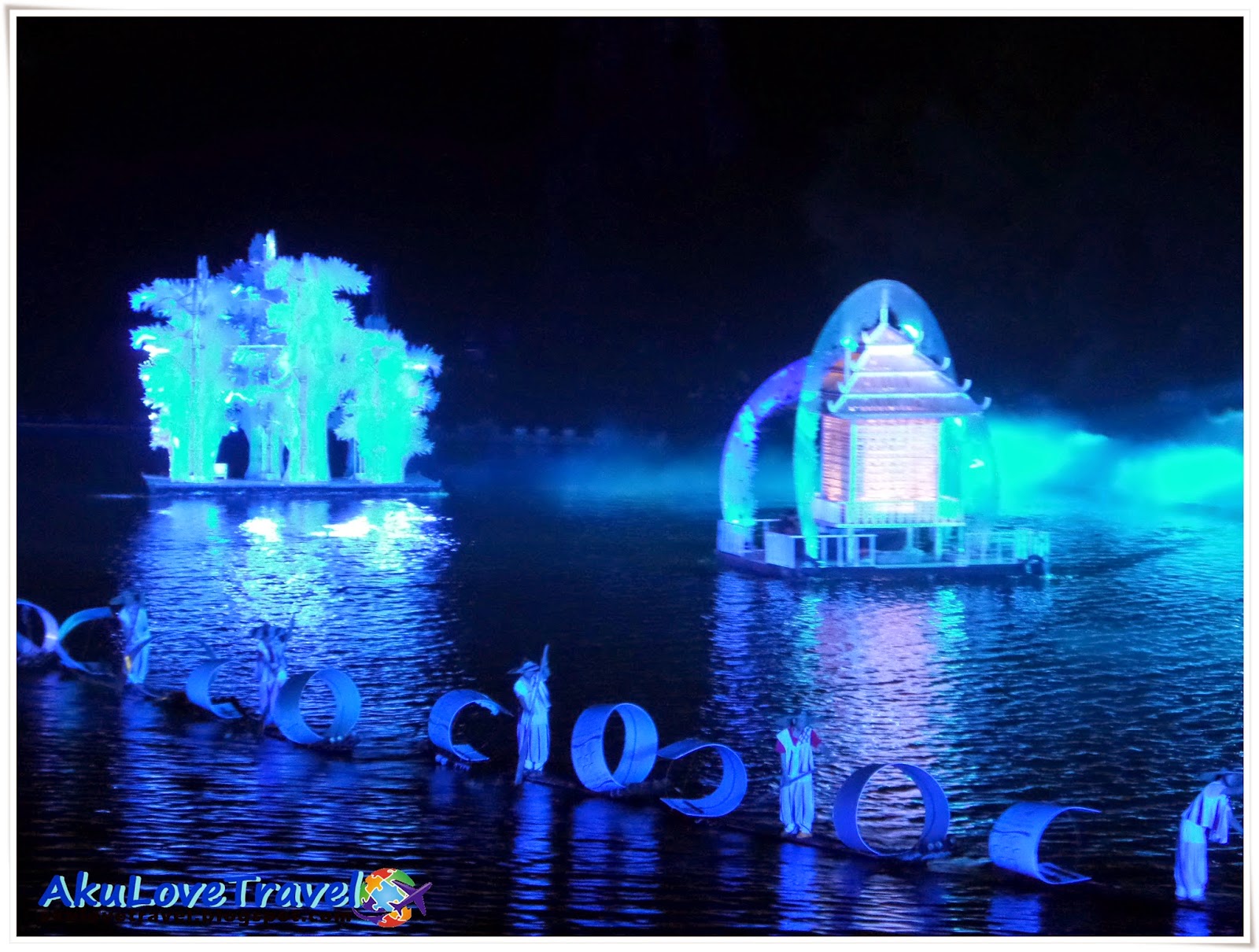 There is a part that is boring until you want to fall asleep..wakakaka. The most impressive as the name of this show is Liu San Jie Impression Light Show, in the middle of the river there is a row of people dressed in queuing lights … eh when is the time in the river is placed a place to stand ?? If it does exist..it’s not possible because what kind of raft does the rubbish want to pass ??

We go out early to avoid crowding with other people..as early as 5 minutes jer. We continued to the parking van. No problem looking for that van..because I snapped the license plate number of the van. After entering the van, we had to get out and take another van. Maybe the van did not pass our hotel. Really tired that night..it’s jammed time to go out.

The experience of day 1 in Yangshuo was amazing. Wait for the next entry..our situation on day 2 is thrilling..exciting and exciting. The mixed feelings make our experience very valuable 🙂