Terkedek-kedek tul want to write a blog … haish .. afraid to forget because of the experience of time in Yangshuo. It’s part day 2 in Yangshuo. This time we have a trip to try after we can not use a tour agent to go to one place. We decided to do everything ourselves. The hotel staff is smart..he uses 1 apps that can translate Mandrin-English. Who understands that we want to see the view on note 20 CNY. He said the place was far away. From our understanding, we need to take a bus to get there. That morning, we also want to start the uncertain journey..the rice and side dishes of Berahim are all packed..it is said to be a picnic at Li River..hehehe.

The hotel staff who did not know English directly took us to the main road … he held an electric car that could accommodate 10 people like that..even the fare he paid. I’m not wrong 1 CNY jer. If in 15min … until the last station. He asked us to follow him again..the road until he reached the bus station. Coincidentally, at that time there was a bus that wanted to go to Xingping Town kut..he told us to get on .. Then he talked to the bus conductor..we had to pay the bus fare ourselves. It was a blur after that time because we thought the bus would stop later. We thought la..maybe the hotel staff explained where we would go down.

The bus time is full. Luckily there are extra seats made of wood. The seat is right behind the bus driver. It had to be a spectacle for all the passengers on the bus. All our views are weird..I don’t know what race we are who think … hahahaha. 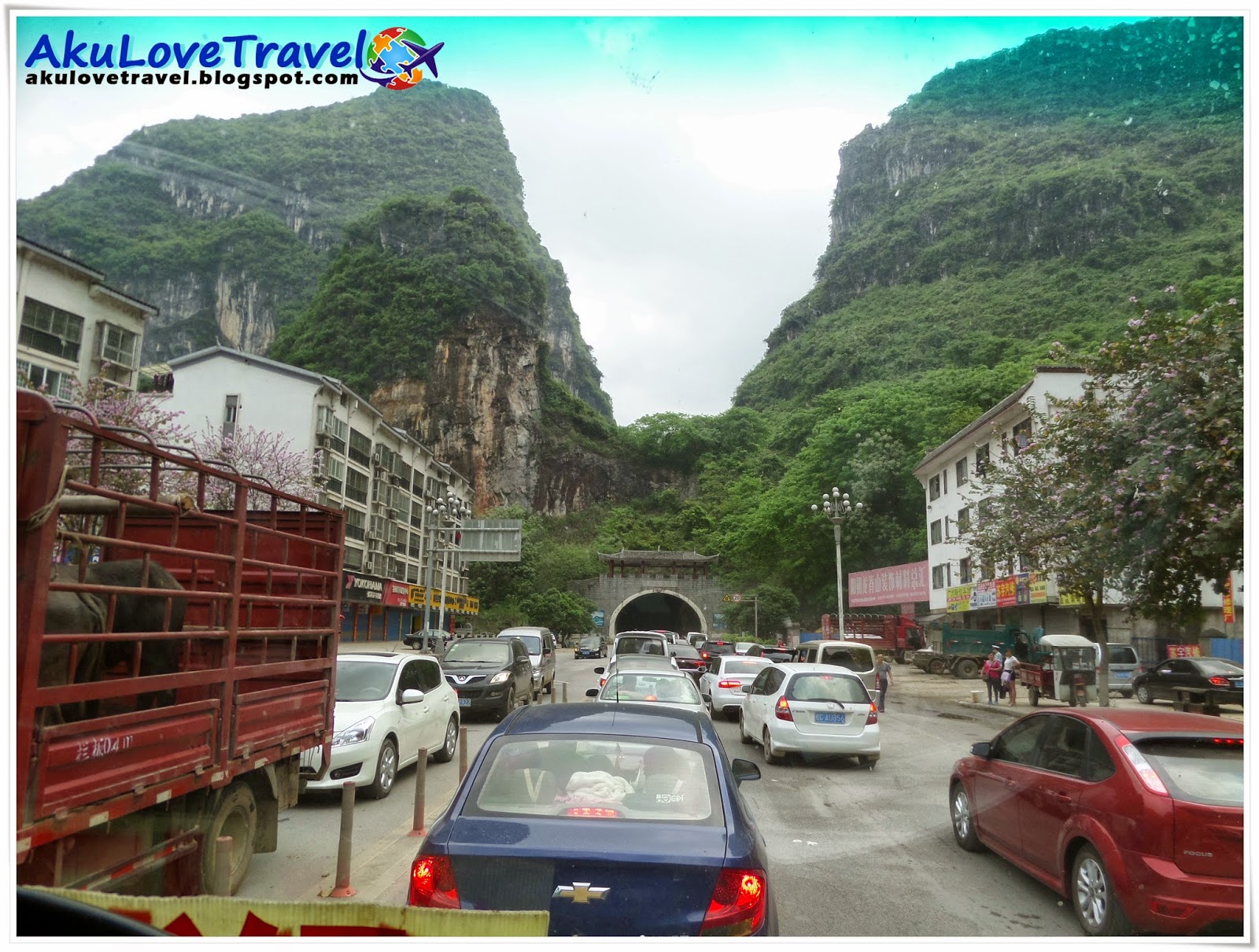 Along the way … the view is beautiful. Many of the mountains that were drilled were made into tunnels like this. 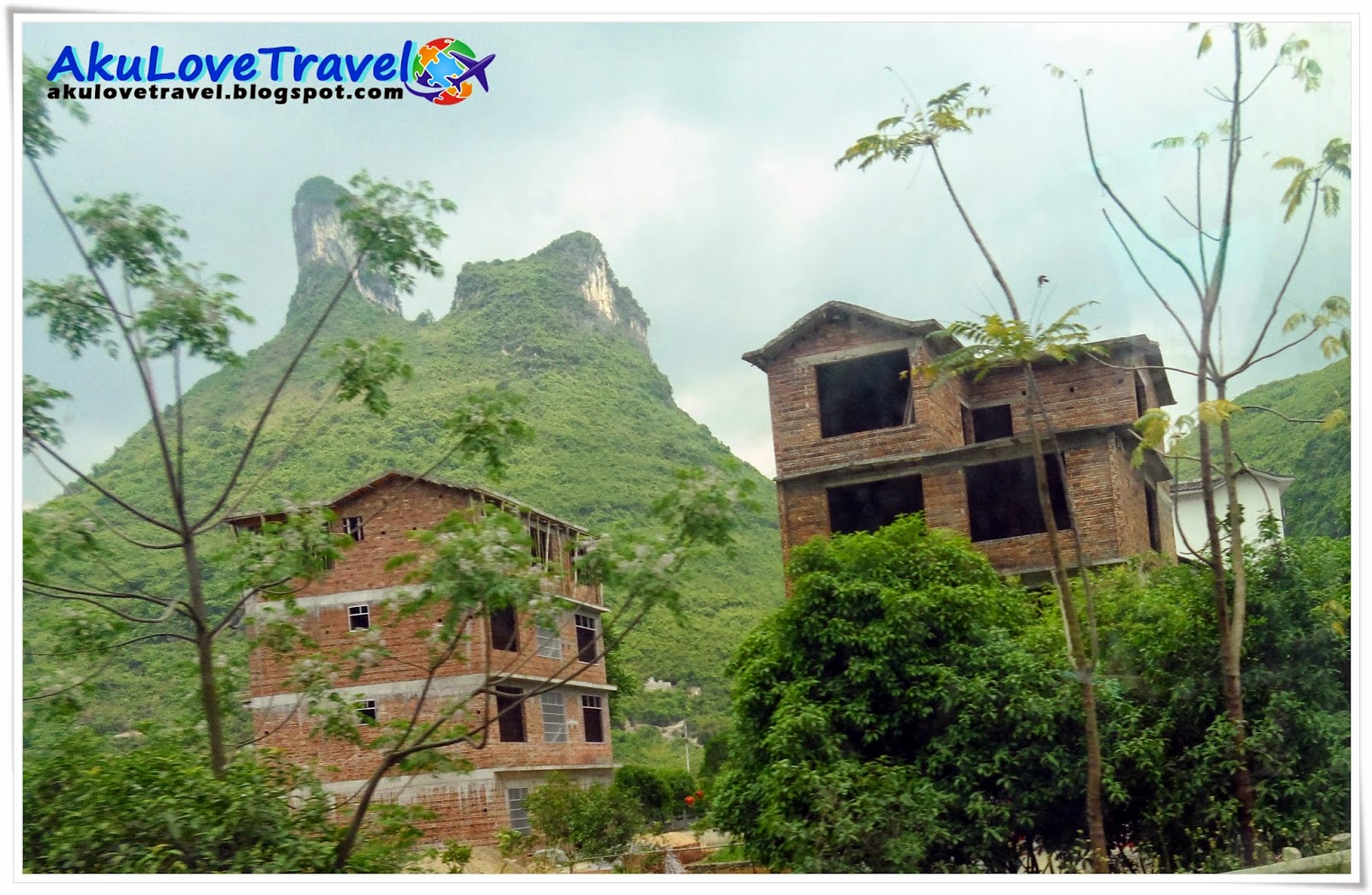 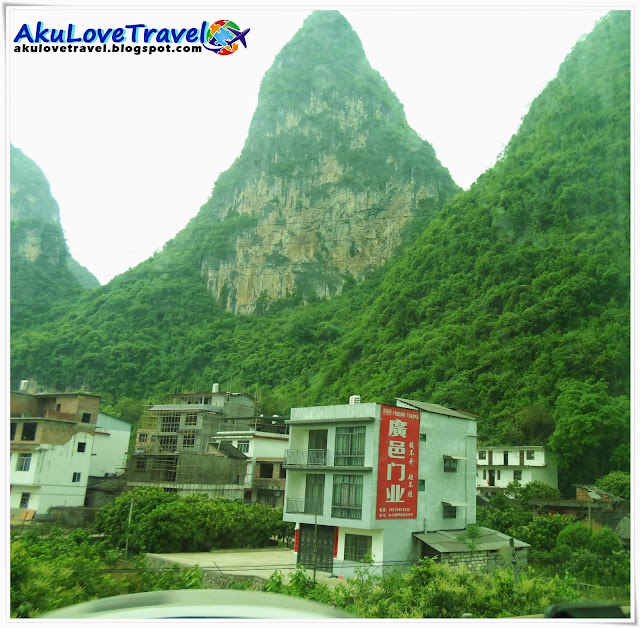 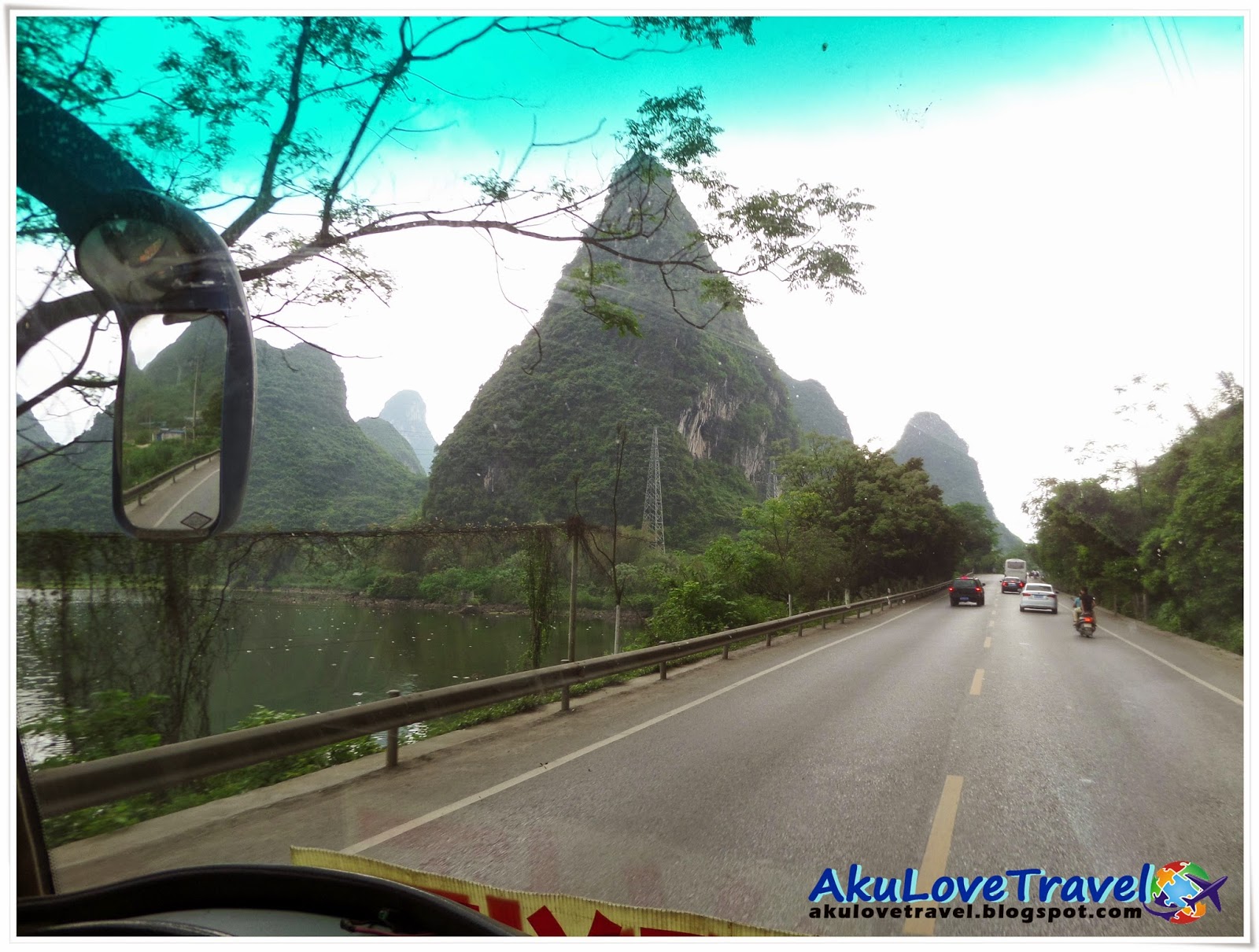 In one area like this lake, there was a very bad smell … apparently thousands of fish, I was a bit dead … floating on the surface of the lake .. why is that? 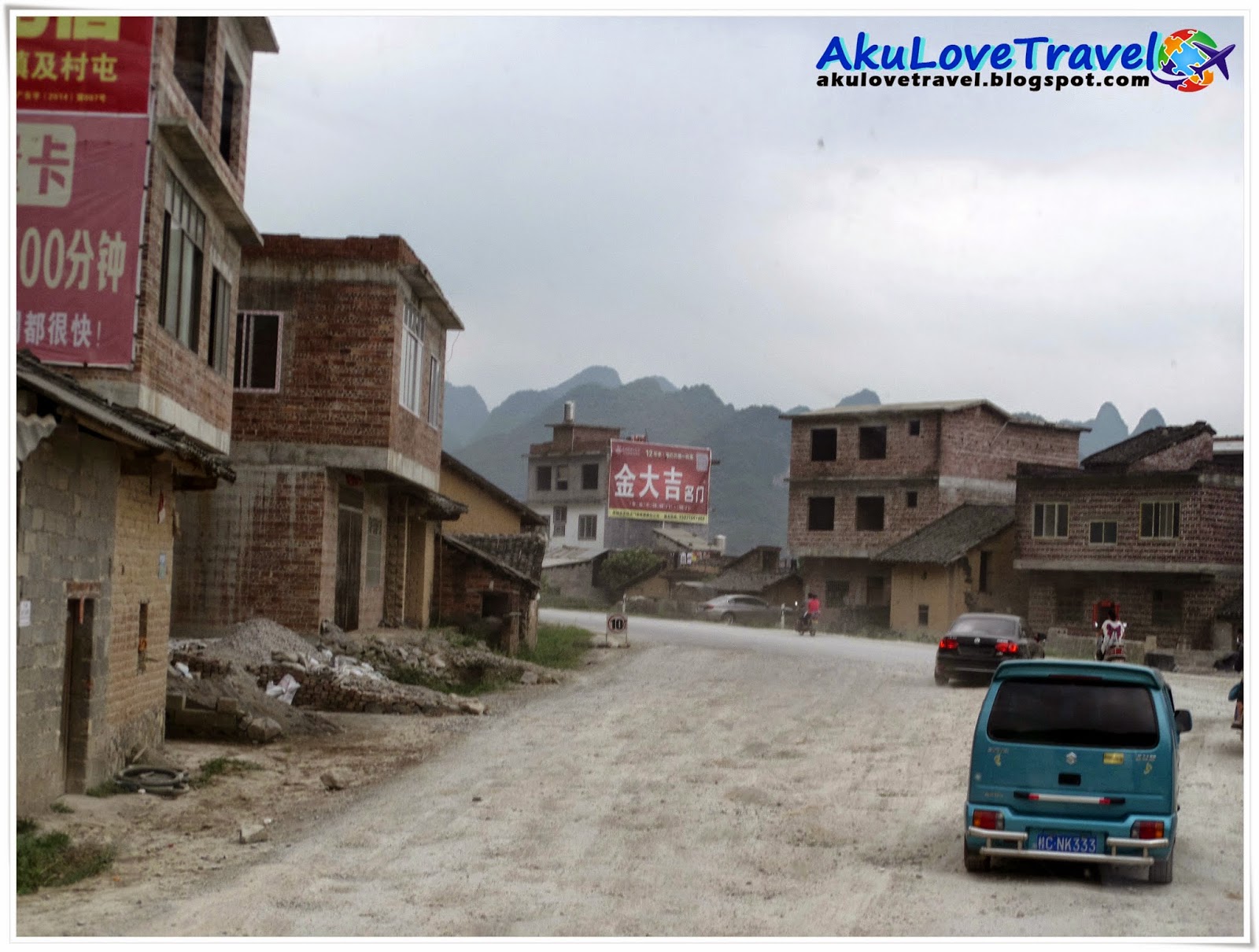 Until one area … tar is no longer … dusty. Luckily the bus driver closed the window. Oh yeah..bus ni takde aircon yer ..There is 1 part of this… this bus stops the market area..many people go up and tell someone to stand. Suddenly there was an ahso, I brought a live chicken that just tied his legs..the chicken was about to fly to us people sitting in front of it… hahahah. Kamchong arrr. I have a phobia with chickens because once upon a time I was chased by a chicken father … eh, some people think differently. I mean a rooster..he flew to claw my back..then I what else..laugh until it feels like doing gymnastics that bends the body forward while taking a long step … hahahaha. Finally the chicken had to be slaughtered we ate 1 family. Thank you .. 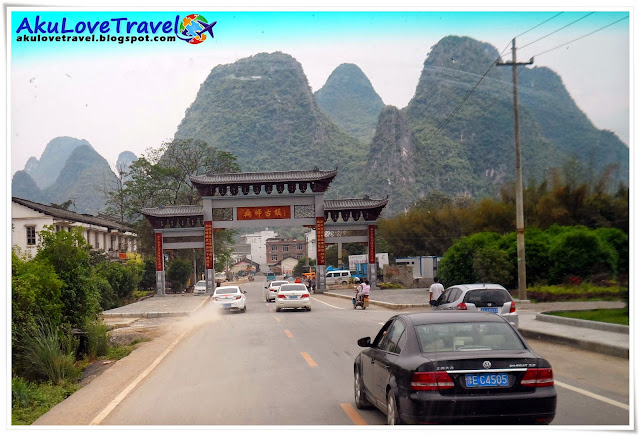 After about 1 hour..we arrived in Xingping Town 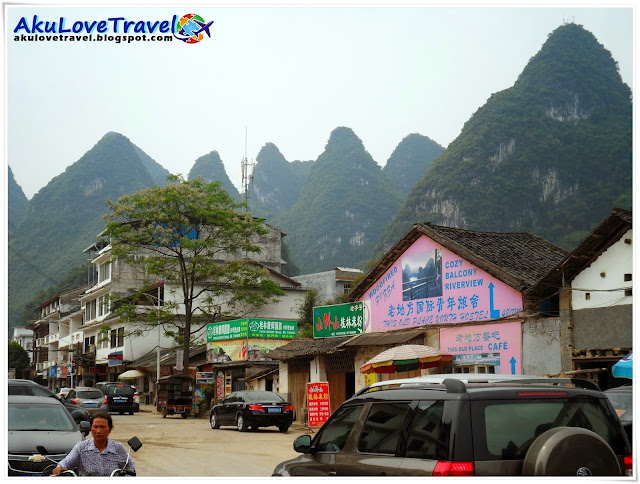 Xingping Town is not big. Our area got off the bus there were many buses that took tourists.

When getting off the bus..eh where is the person who promised to wait for us ?? Hah already. It ‘s too hot to say that even a bottle of drinking water is not enough..hahahaha. Gabra is crazy at that time. My sis kept calling our hotel manager to stay. When my sis told us about our situation at that time because she did not know where we were that day because she was outstation. Everything is managed by his staff. He asked us where … I really don’t know where it is..adoiii … it just so happened that there was a Taiwanese mamat in that area that we thought was Chinese. He is the one who explains through our cell phone location. The mamat tupun said the manager told us to wait because the person who wanted to pick us up was jammed.

While I want to wait for the person who wants to pick us up … let’s chat with the mamat. Time plague just found out he was from Taiwan. I have never been to Taiwan..so I want to know what Taiwan is like. According to mamat tu Taiwan is better than China … and culture dorang more to Japan. Mamat is like a photographer … he advised us to climb the hills of the Xingping area to see the view from above. In half an hour jer can reach the top he said..I can’t afford it … hehehehe. He was actually waiting for the bus to Guilin.

Finally, our driver arrived … because he was jammed, he had to park a little far. Due to that situation..we experienced through the old building hallway of Xingping Town 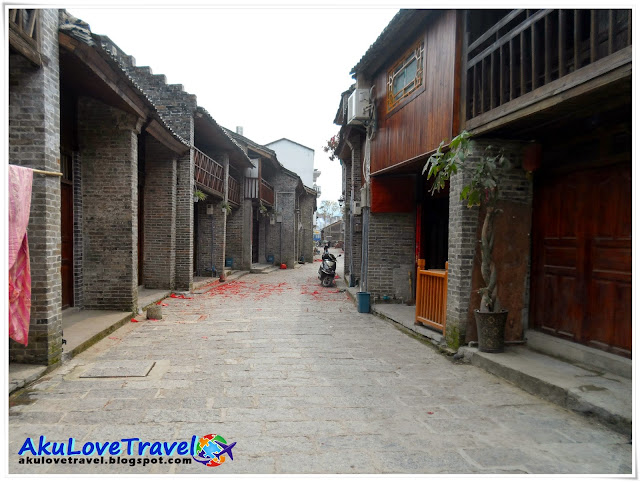 Old building which is mostly a shop 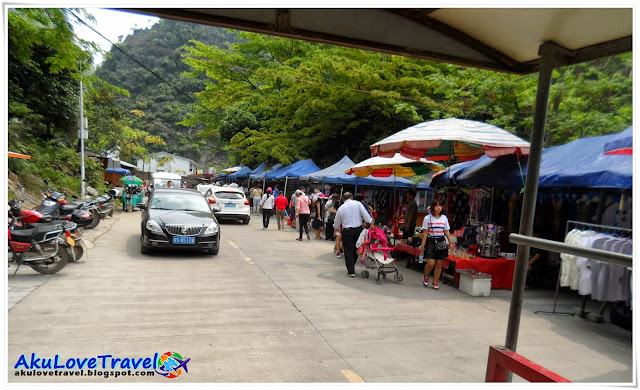 Our vehicle is a tuk-tuk driven by a woman. The journey takes about 10 minutes through the souvenir stall. People are very crowded. 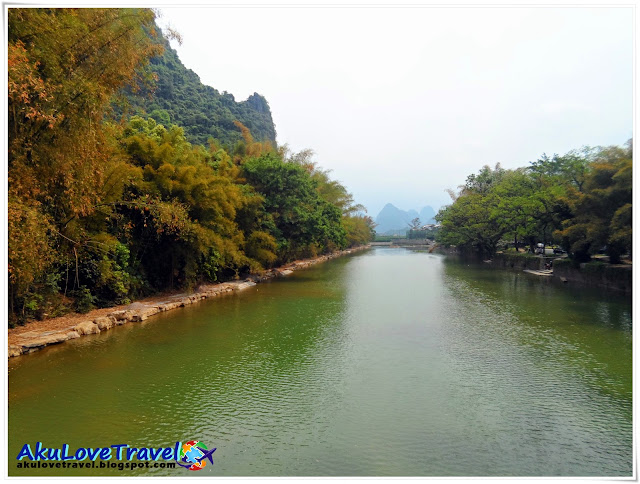 View across the bridge …

Why do we bother here ?? Originally we wanted to take a cruise from Guilin to Yangshuo which will go through a beautiful view2 along the Li River, but at the last minute change the plan and continue to port in Yangshuo. So, this is the best way to feel the experience.

This is the route we raft. From Xingping Town to Yangdi. The round trip takes about 2 hours. While going down the Li River..we can see the beautiful nature. The mountains along the Li River are said to have the shape of something.

Look at this … jumping can’t wait to have a bamboo raft..hehehehe 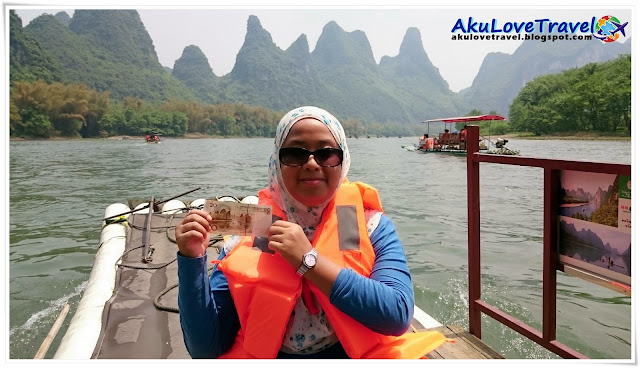 Mission looking for a view in the 20CNY note … hehehehe. Payment of 150CNY / person includes transport from Xingping bus station and bamboo raft. The bamboo raft we boarded is not the original bamboo … but the UPVC pipe is made to look like bamboo. 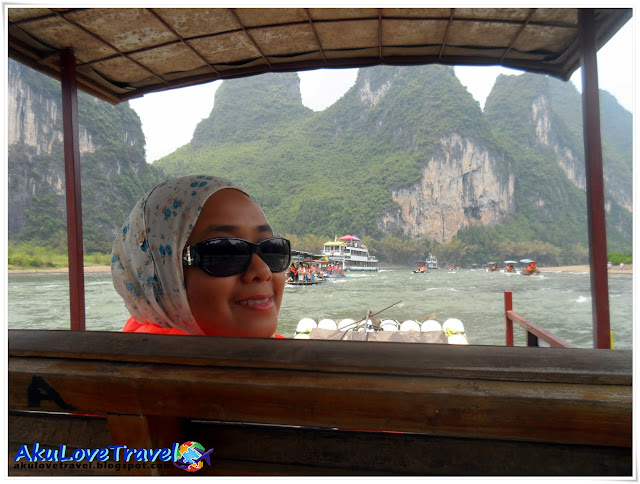 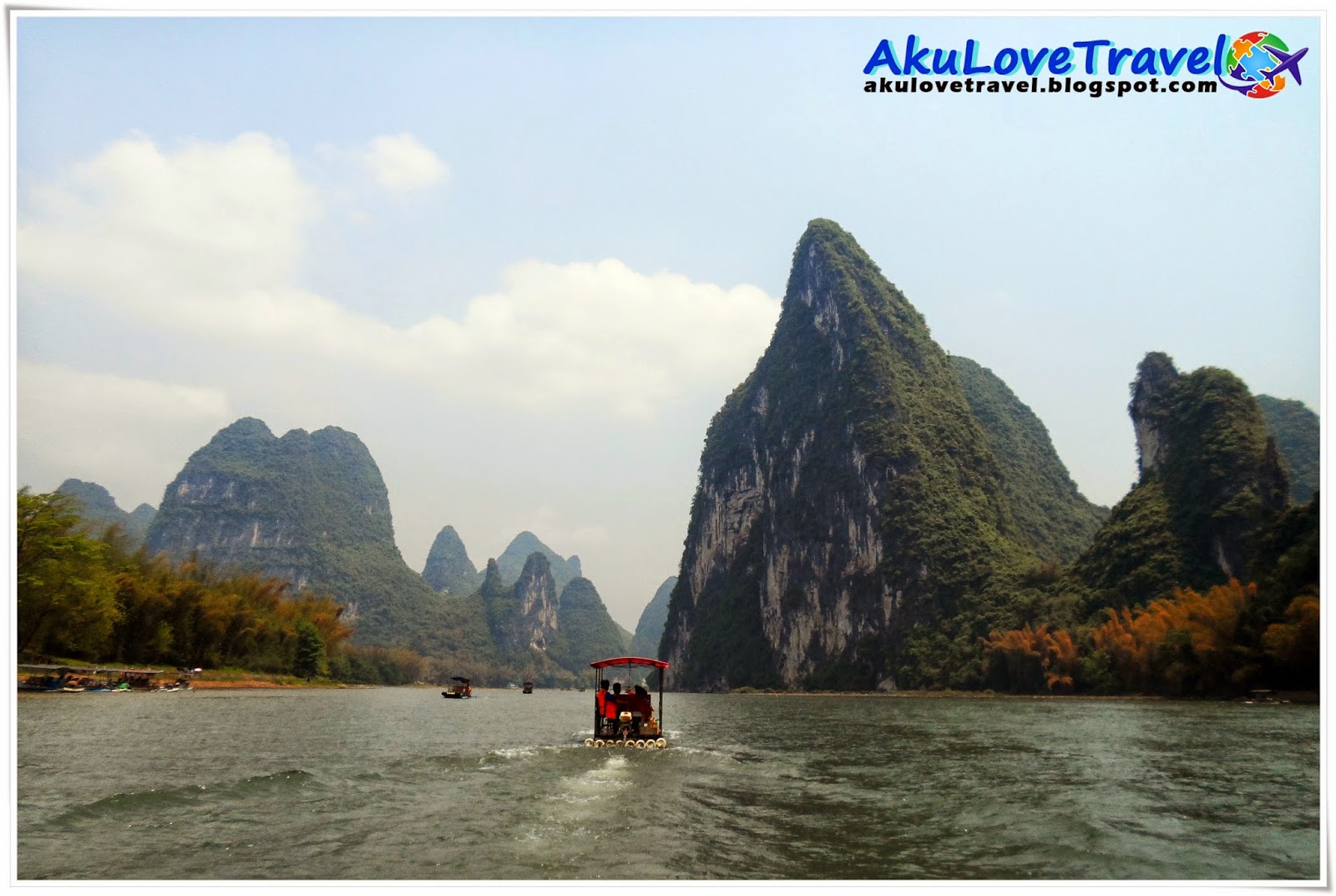 If you look at the view along the Li River … fun wahh there wahhh here … heheeheh. Calm down this bamboo raft trip..the wind is comfortable..lost all thirst..tired..hot..problem..don’t think about what trouble we will go through to return to Yangshuo..hehehe 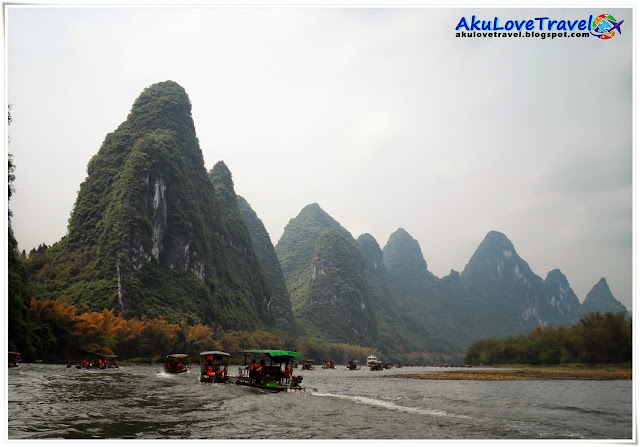 The shape of these mountains has a meaning but I don’t really want to be very alert. 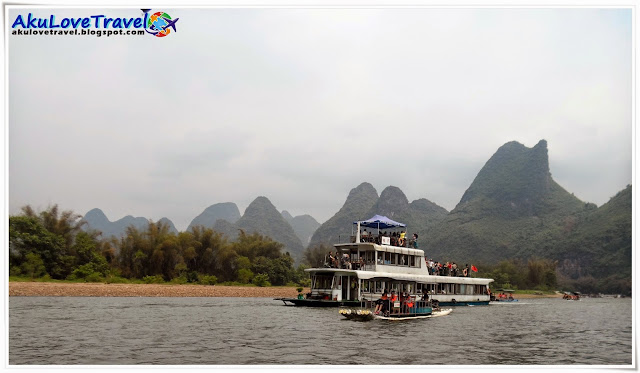 See ?? Scattered bamboo raft … there is also a cruise. It feels like those cruises came from Guilin. 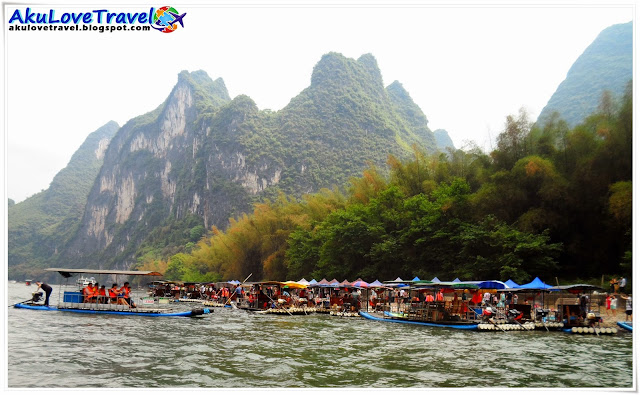 This bamboo raft driver is ok because if we want to stop at any of the banks of this river. He also cares about safety … always make sure we wear safety jackets because the river water flows quite fast 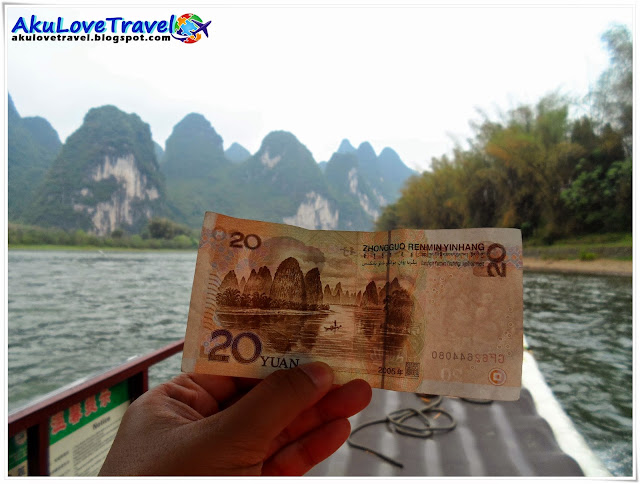 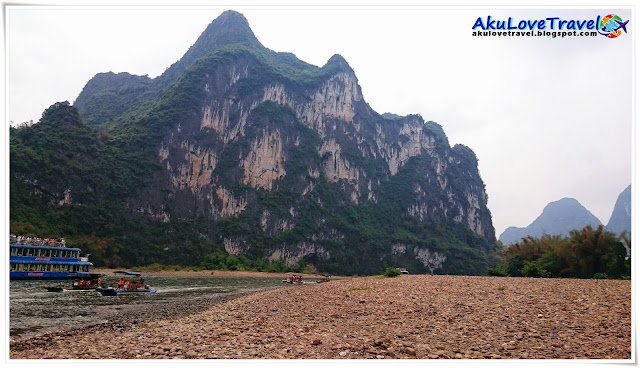 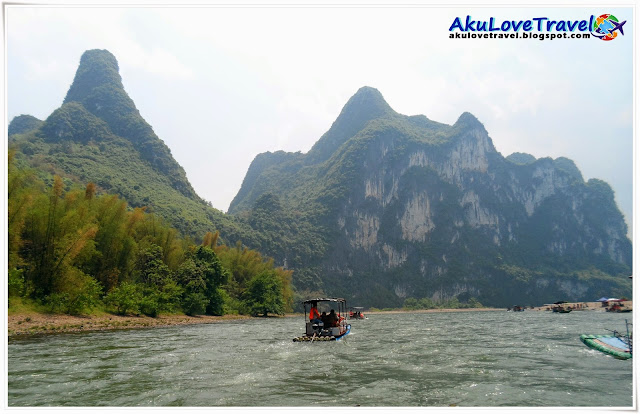 We stop here. I want to count the horse’s head. The mountain is called Nine Houses. If terer..try guess not enough 9 horses 🙂

The shock is stop here … I can try traditional Chinese clothes 🙂 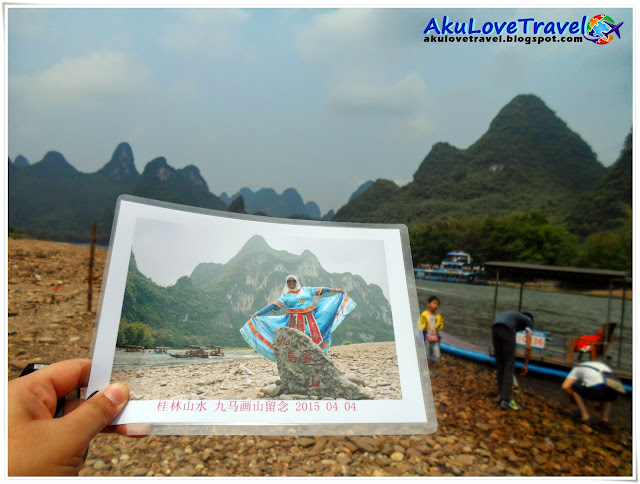 To wear this shirt just 10CNY plus 15CNY for this picture … yeeeee !!! 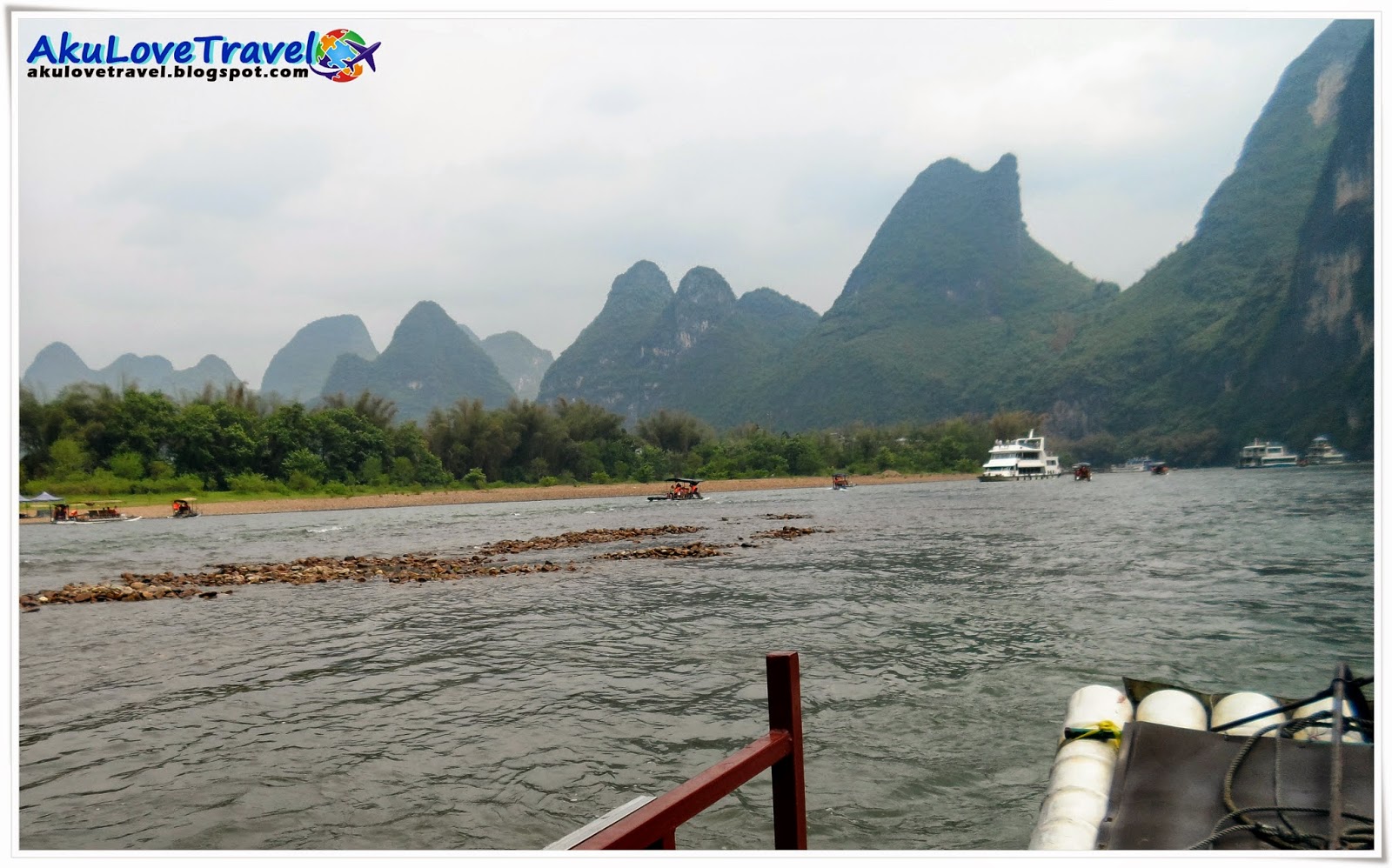 The middle part of the river has rocks … this danger !!! 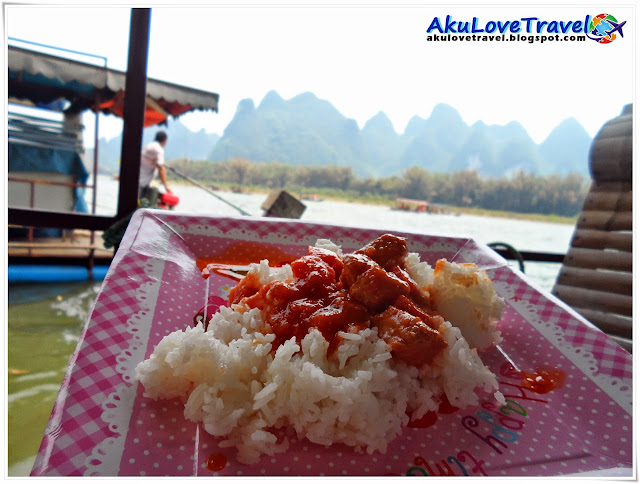 When we got to the place where we came up … we had a picnic on the bamboo raft … the driver was kind … he shared a meal on his bamboo raft that we originally wanted to eat by the river which was not very suitable. 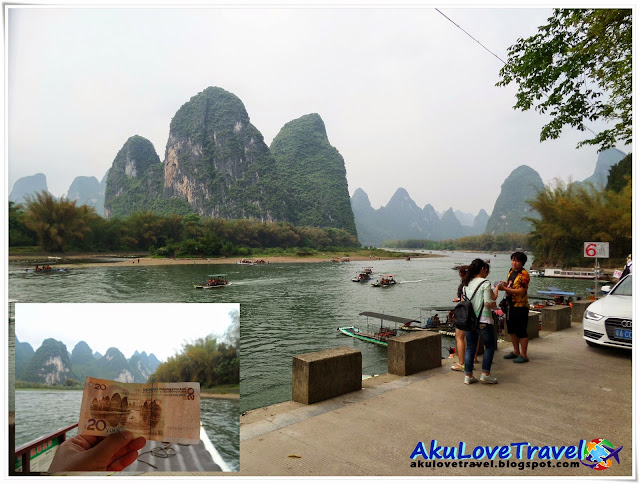 Actually, my sis snapped without realizing the view … this view can be seen not far from where we ate … hehehee 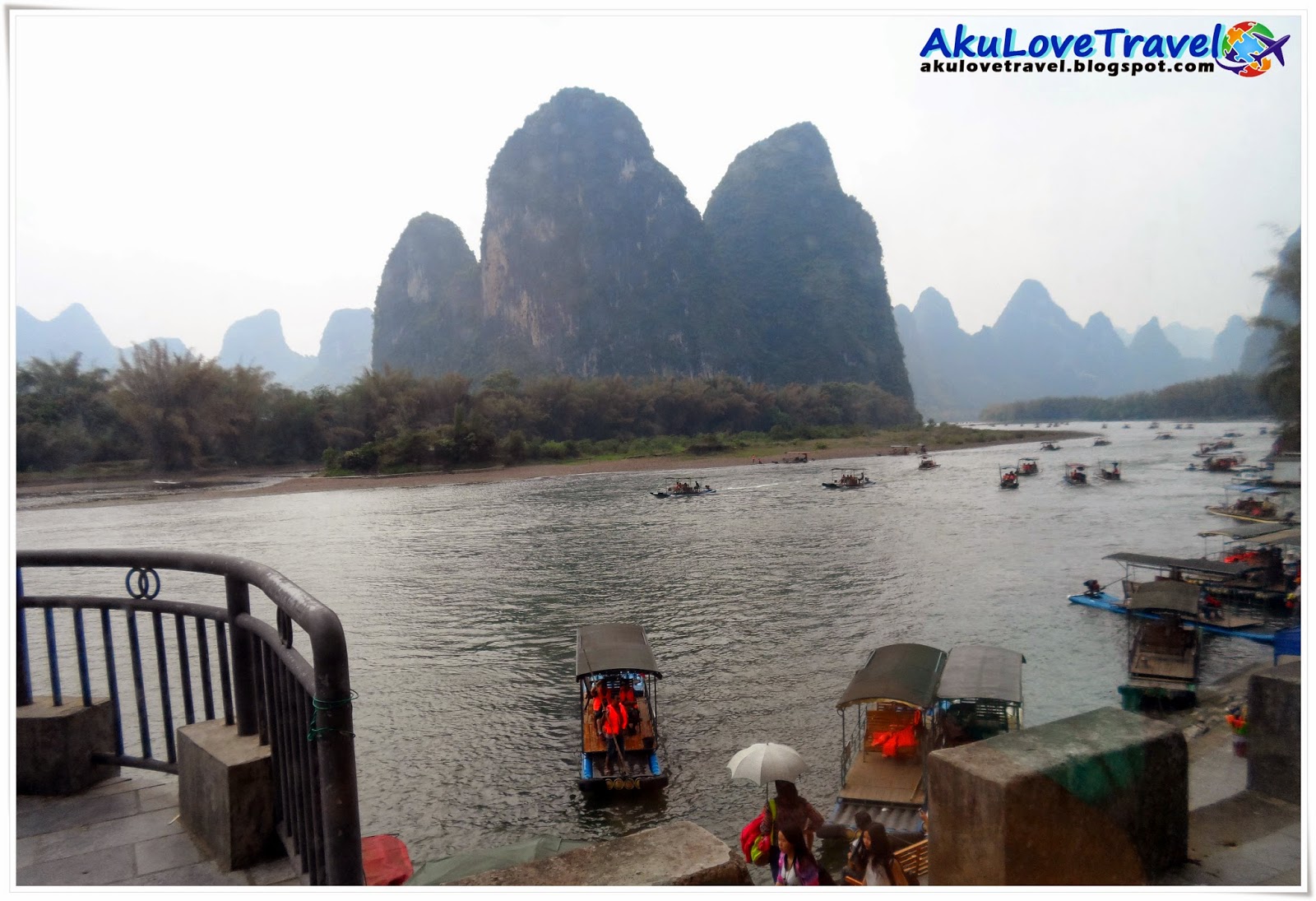 It looks like iron..that is the 20CNY view deck …

Wanting to return to Yangshuo is a problem. We were sent to Xingping Town in a van … there were 2 more amoi with us. Alhamdulillah … amoi ni tau english. People took us to the bus station while shopping for souvenirs in the row of old building shops we passed by earlier. 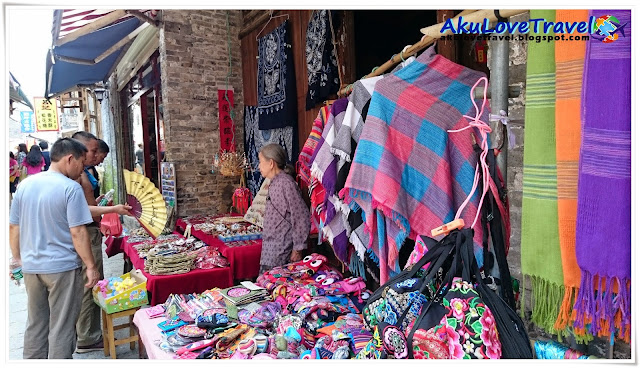 We bought a fridge magnet here

When we arrived at the bus station that did not look like a bus station, we had to Q to get on the bus. Originally I was halfway through the bus..hahahahha..everyone who Q looked at was kind of jer..keep my sis angry and told me to get off..wakakaka . Shame on the nation jer..adoi. The bus is full but Q people seem to have to wait for 2-3 more buses … hah already. It’s hot..it has to be Q in the middle of the heat. We parted with the two amoi people after we confirmed where to wait for the bus.

Thankfully that time … the bus before the full one said it could take two more people. Amboiii said that … how do you understand..hahahaha. Ala … the conductor called Yangshuo..sure he understands right. Because we were the last two people to line up … we kept running into the bus which was just the door next to us jer … very grateful. The original bus I was rushing to get on was moving again … but the bus we boarded was already moving. Once again we became the spectacle of other passengers because we sat in the extra seat behind the driver … hehehehe. Many times we confirmed with the bus conductor that the bus to Yangshuo..is also scared if not. Tell us open the folder to show the word Yangshuo in Chinese. Although sitting in was not very comfortable … we had a good time … hahahha.

After reaching Yangshuo..we move back to the hotel then just go back to another place anyway. Take a little break, right? That day I drank bottled water..1st time in my life I felt very thirsty..hehehehe.


That day was a day that had a lot of impact on us. We realize… even though God is testing us, in the blink of an eye He gives us help. That experience was great. Throughout Yangshuo and Xingping..there are people helping us. Everything that happens is sometimes unexpected. This travel is not for us to organize how many countries we have been to..but to expand our thinking by looking at something different from what we see in our country.