The story is over Bosnia and Herzegovina. Now begins the challenge in the next country Croatia. Indeed our exploration has only been counted in half. There are still many more trips and experiences that we will go through during this trip. Grateful to the Divine Majesty for facilitating each of our journeys and affairs.

The date that day is 9 January 2018. We left Villa Park when the day is still dark. After putting the key in the letter box, by reading some verses from the Quran that I memorized, we started the move. It was about 6.30am. The morning cold that was about 5 – 6 degrees Celsius did not feel cold at all. Why not, gabra is very knowledgeable. The situation in the area is very quiet. Other people maybe have a good night’s sleep again. The dog barked. I broke a tree branch. It is said that if a dog comes, it can be knocked. His eyes darted around. Suspend right while going to the bus station. I could sweat at that time because gabra mixed tiredly pulling luggage … hahahah.

Thank you to all of us at the bus station. There were some people waiting for the bus at that time. It looks like the bus station is like jer … but there are buses going to Germany … don’t play around..hahaha. Our bus to Dubrovnik delay up to 1 hour. If I only knew such a delay..I don’t want to go out in the morning blind in a state of fear. Uncomfortable, I really want to sit on the concrete chair provided because the beak is cold..hahaha. Occasionally sit occasionally standing.

The bus you are waiting for arrives … you have to provide a small amount of money. The reason is, each luggage is charged as much 1 Euro or 2 BAM. I once read from..I forgot where it came from, mat salleh, his luggage was thrown out of the bus bonnet because he did not have small money. So … be careful. Our luggage will be tagged by the drive after we pay.


Oh ye..about the bus ticket, my sis bought it online from the website https://getbybus.com/en/ . A week before our trip. A week or two before the trip, we still did not decide to go Dubrovnik or Dirty (Montenegro) or continue to Lake Plitvice. The most we want to avoid is from Mostar continue on Lake Plitvice, that’s why traveling by bus for 12 hours is not my fault. Our discussion to choose Dubrovnik or Dirty this always ends in a deadlock. One day, my sis suddenly said .. “ok..takyah dah fibers. Dubrovnik is our choice. “My sis got a flight from Dubrovnik ke Zagreb about RM300 / person. That’s why we were on the bus to Dubrovnik. 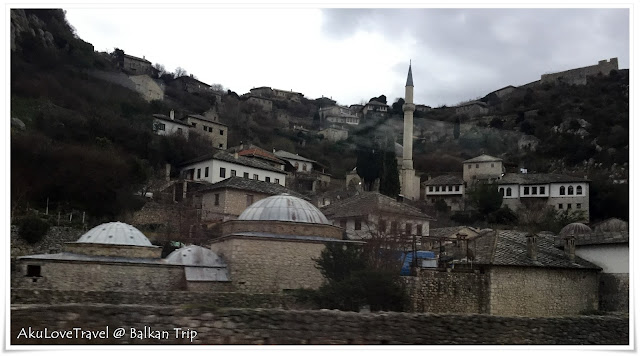 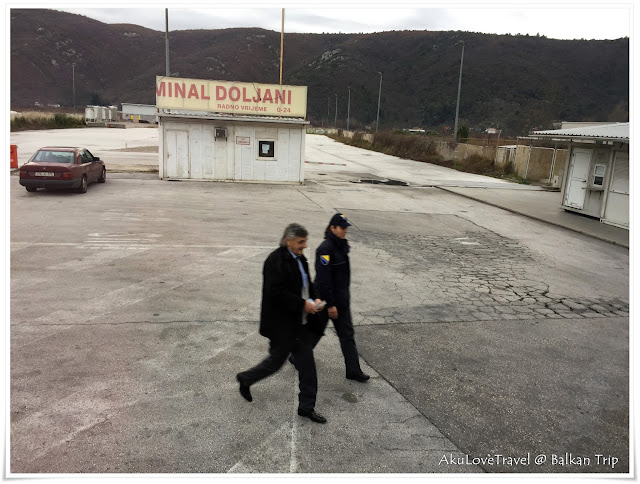 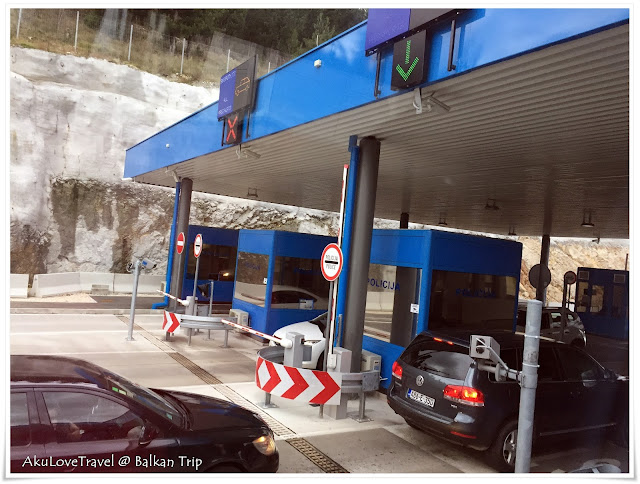 Not long ago, we had to go through Croatian immigration. In contrast to the immigration system on the Bosnian border. We need to get off the bus then pick up the luggage from the bus bonnet. Then, we had to chop the passport at one of the immigration counters (the immigration was in the blue compartment on the far right). After I stamped my passport, I also need to drag my luggage into the building next to the road. Takde pun scan luggage. Strange right … just came in from one door..then the immigration told me to go out the other door without checking the paperwork. Exit from the 2nd door … continue to meet the driver who is waiting to put our luggage in the bonnet. It’s simple because … hehehe. What I do not understand … a few hours ago when we wanted to be near Dubrovnik, we had to go through immigration again. At that time, immigration officers collected our passports themselves. After the chop, the co-driver will return. 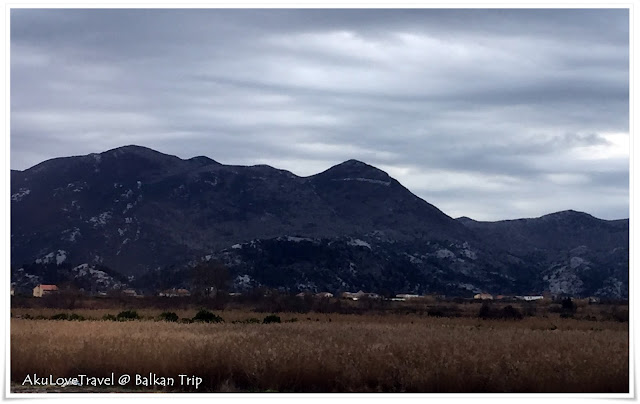 View after crossing the Bosnian border 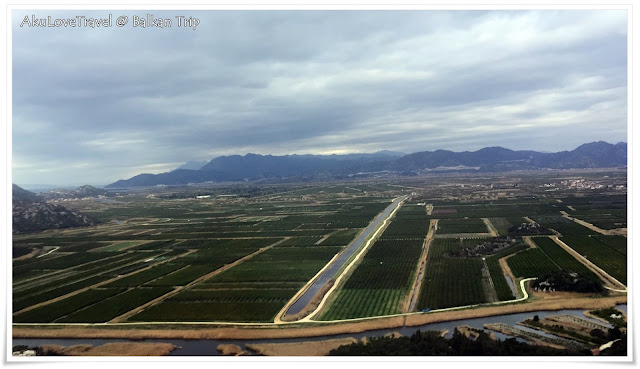 Up to here, we both and can not stand the view cun on the right side of the bus. At that time we were sitting on the left. Because the passengers were less than half the bus, we changed seats. We sit strangers because we want to serve the view. Remember … must choose the right seat. Free seat yerrrr … Let’s look at another view. 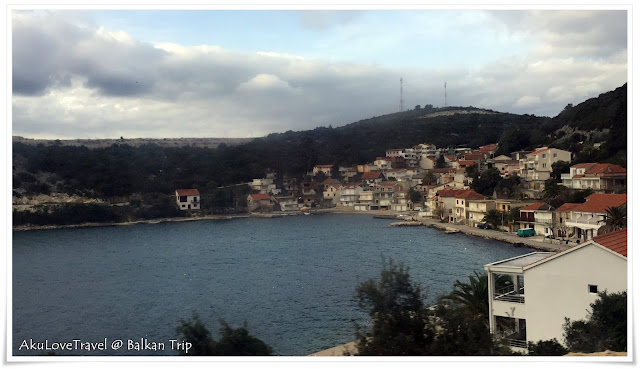 No offense to me after 2 hours of travel like that, we were served with a pretty amazing view. Dubrovnik is nicknamed “Pearl of Adriatic“. What I share in this entry maybe not so clear about the beauty of Dubrovnik waters … the reason I snap from inside a moving bus. In the next entry … I’m sure you will all be more stunned by the beauty Dubrovnik ni. 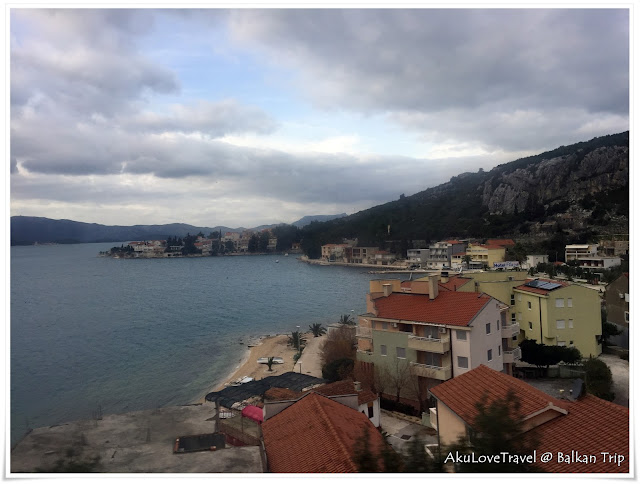 I noticed the waves along the waters in the Adriatic Sea are very calm..maybe that’s why many houses are built near the coast. 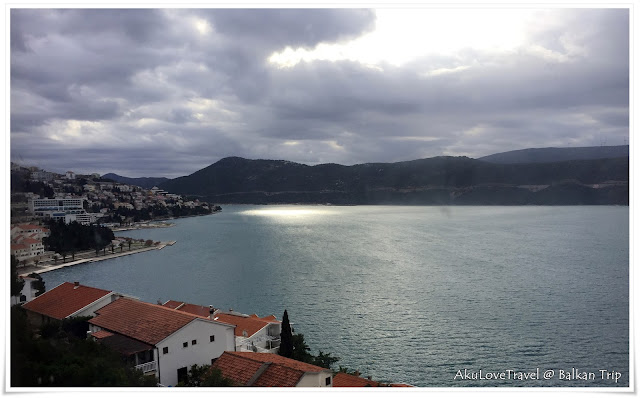 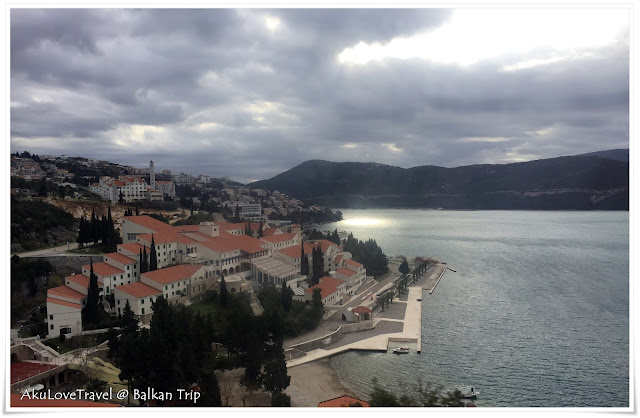 The atmosphere that day was a little cloudy, but I noticed there was sunlight shining through the thick clouds … that moment was quite special, I think. A miracle of the creation of God Almighty. 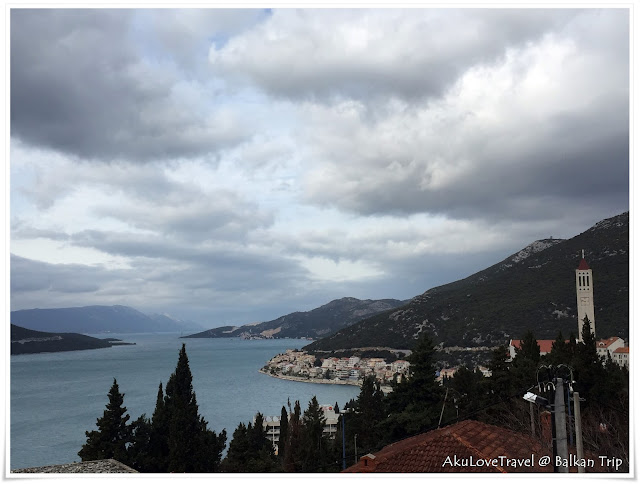 Like a trip from Sarajevo ke Mostar, so is our trip this time … 2 in 1 …. panaromic journey so … 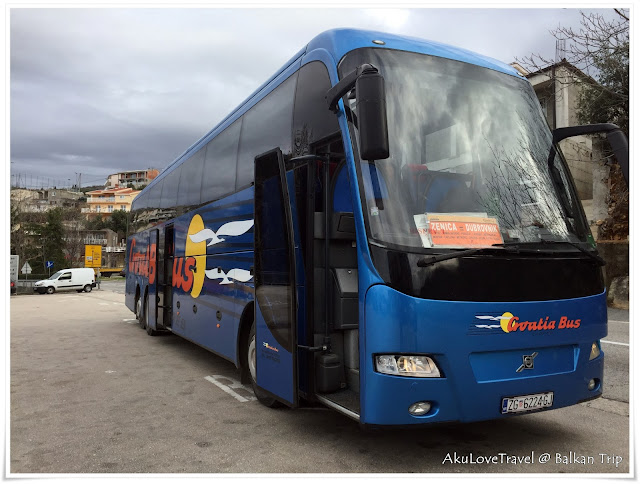 This bus stops at a restaurant. I had time to go to the toilet. He stopped for a long time, in 20 minutes I was not wrong. We were hungry at that time because we didn’t have breakfast … just ate peanuts. And unfortunately we do not have a penny of ancient Croatian money … we plan to withdraw money from the ATM at the bus station. And unfortunately, the restaurant does not accept cards … we can’t want to drink hot coffee. Only able to smell the scent of brewed coffee … so sad.

We continued our journey … I did not have time to close my eyes because the view outside the bus was very beautiful. 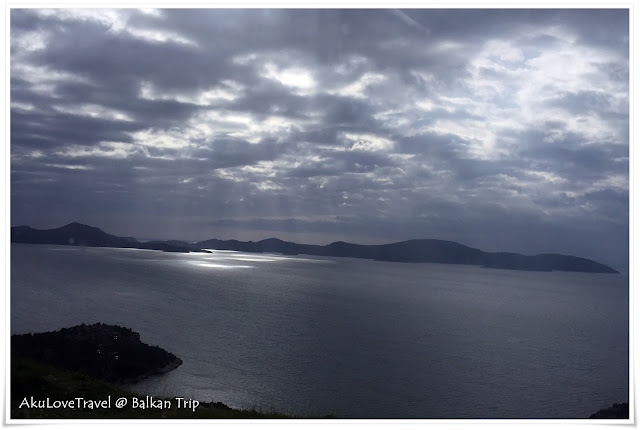 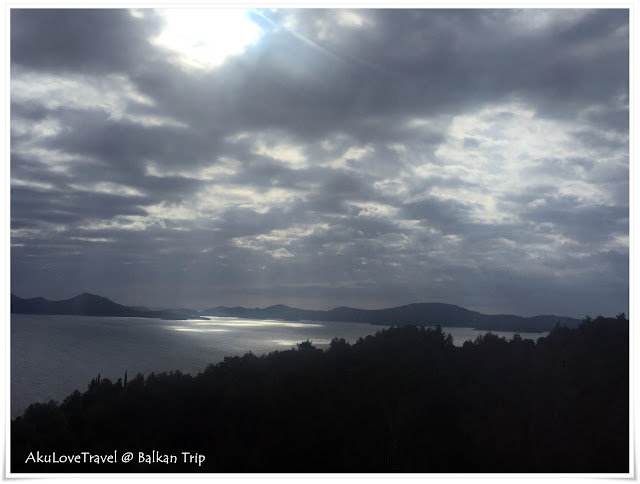 I had the opportunity to see this beautiful sunshine again … 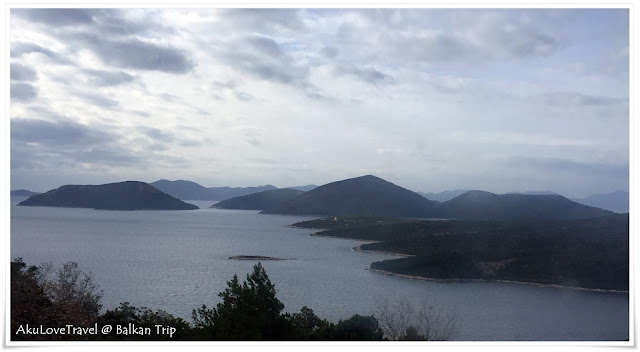 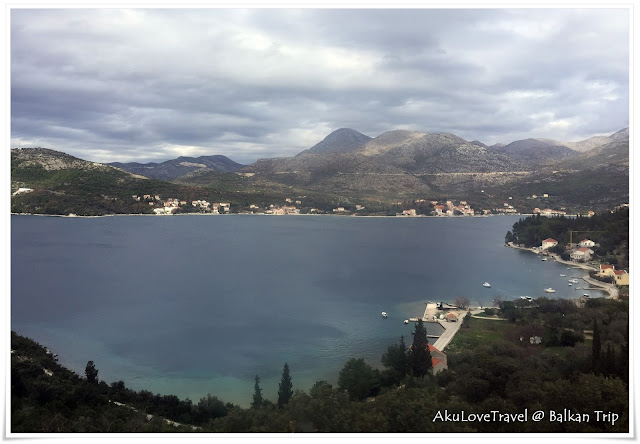 Getting closer to our destination … i love this view. The sea water is really blue and clean..i wish to stay at a place like this. 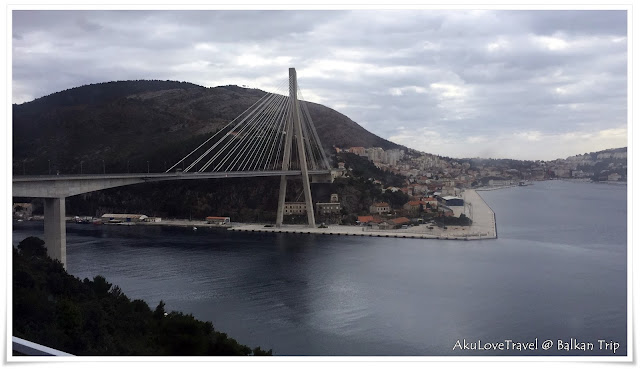 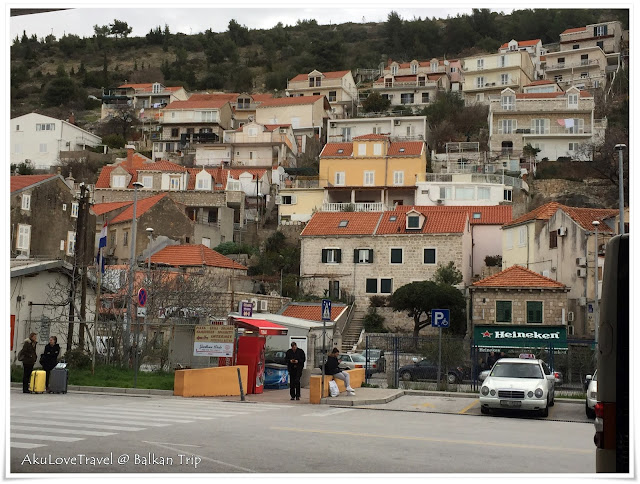 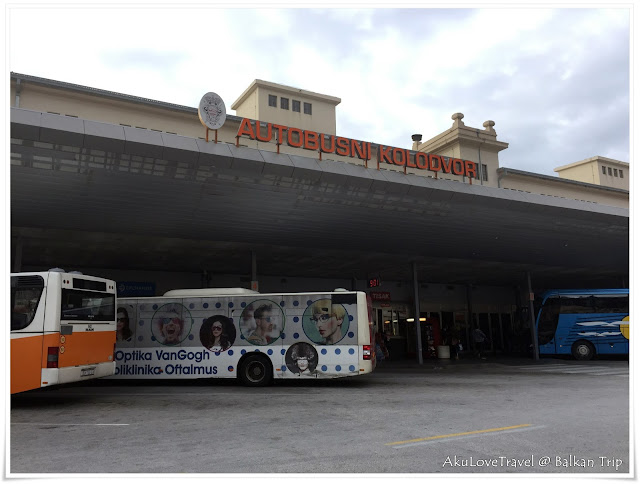 Thankfully we got there … the first thing we did was withdraw money. Then we walked to the hotel. 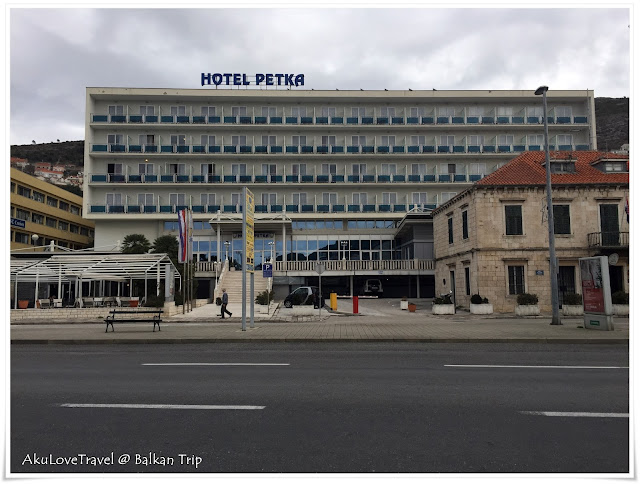 Hotel Petka This is our choice due to the distance from the station bus just walking distance. We only walked less than 5 minutes to get to this hotel. 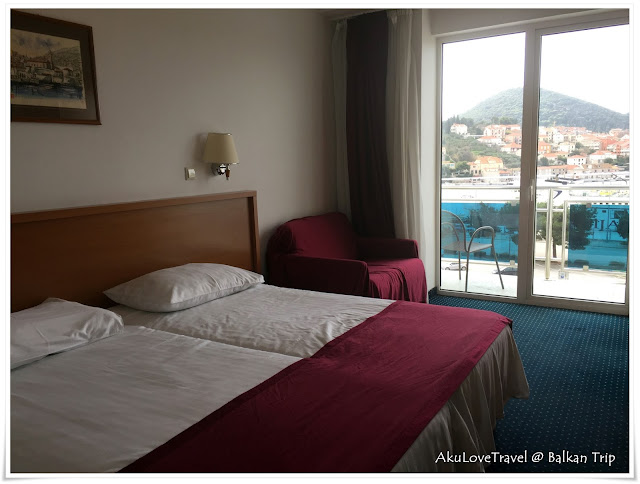 Thankfully we were allowed to check in early. That time was not wrong I was only at 11am. This hotel looks like an old hotel..we are satisfied … exspecially view outside the balcony. 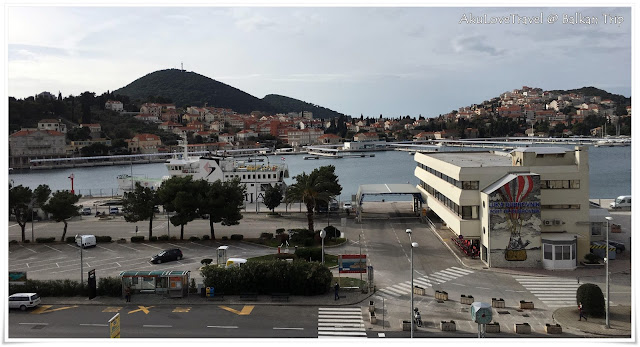 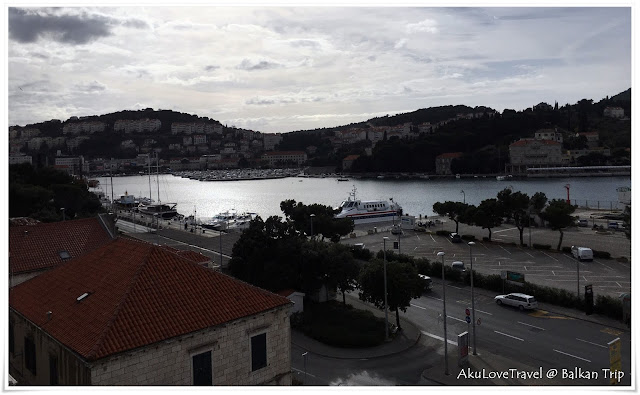 Taraaa …. our room is really facing Adriatic Sea and also ports. The water is so fresh and most importantly, the night is not scary like in Mostar..hahahha. The weather was not that cold Istanbul or at Bosnia. Average weather time tu around 17 degree celcius. 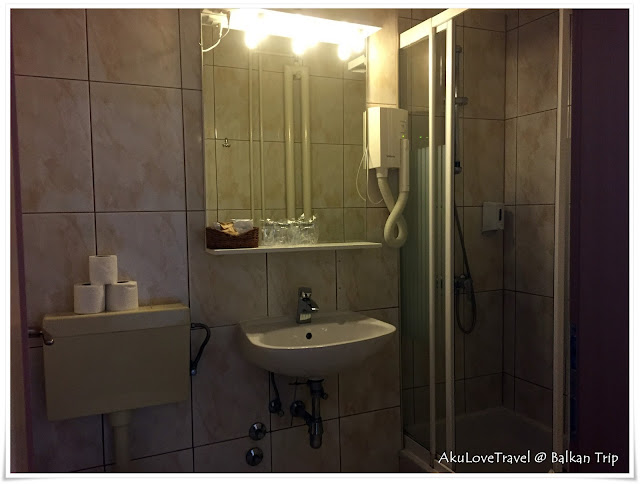 The toilet was clean. 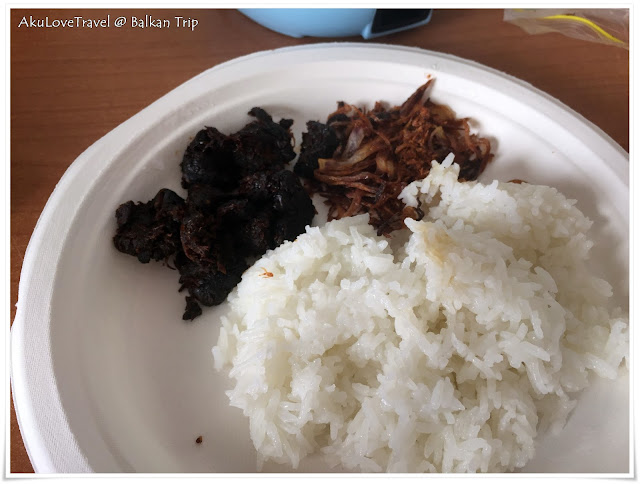 The first thing I did as soon as I entered the room was to cook nasik. We ate rice with black cooked FBI meat. Can check IG FBI for contact agent who sells this cooked black meat. This black cooked meat is actually frozen. I play buying jer without knowing about the frozen thing. The FBI agent told me to cook again so it would be dry … so it will last a long time.

We can’t linger in the room … our time in Dubrovnik just one or two days. That morning we will take a flight to Zagreb again. Our planning that day is to go Old City Walls. That place is said to be the shooting place of the movie Games of Throne. I never even knew about that movie … hahaha. Dubrovnik just heard the name of the time I want to plan to go there. Not only that …Croatia I have never heard of it..hahahaha … haper lah. This is proof of the power of Allah Almighty..He gives the opportunity for people who do not know what to know more clearly..Subhanallah …

Frankly, I said, I don’t study much Dubrovnik. That’s why I was stunned to see the beauty of the place we will explore. Follow my experience in next article entry Old City Walls yeee …